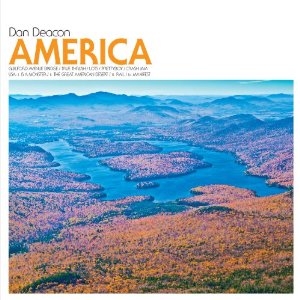 2009 was a watershed year for Dan Deacon. He came to wider attention with Spiderman Of The Rings in 2007 (up until which point he had languished in relative obscurity), but it was with Bromst that his stock really began to rise. A sprawling album that, in contrast to its predecessor, was (in his own words) “less about a party and more about a celebration”, it put him on the map in a rather emphatic manner.

Three years later, he’s signalled his intent to graduate to the big leagues with a new recording contract (this is his first album on indie powerhouse Domino), and a new record to go along with it. Never one to shy away from more ambitious undertakings, he’s turned away from parties and celebrations to something much, much bigger: the country that he calls home. America itself is a melting-pot of ideas, and this is reflected in the wide scope of Deacon’s newest album. It doesn’t stretch to epic lengths like Bromst did – its 43 minutes seem much less daunting on paper than its predecessor’s 64 – but it accomplishes just as much.

With a new label has come a new focus, as well as a new ethos – organic instruments are employed for the first time in Deacon’s storied career, and they add a palpable sense of warmth to his sound, even when he ups the BPM count and instils his compositions with manic urgency, as he does on opener Guilford Avenue Bridge, whose thudding drums and skittering melody lines hurry the listener along, only allowing for a pause to catch breath every so often; when, towards the two-and-a-half-minute mark, everything falls away but the urgent synth melodies, a moment of relative serenity is reached, before it, too, is swept away as the relentless rhythms that drive the song return.

Crash Jam unfolds in a similar manner, with its electro-rock stylings given extra depth, not to mention a sense of otherworldliness, by woozy, psychedelic vocals. The ferocious, percussion-heavy climax is something to behold. Despite its hectic nature, however, America also contains moments of pop brilliance; lead single Lots, in spite of its heavy subject matter (visions of a post-apocalyptic world crop up), is the most infectious song on the album.

Deacon is as ambitious as ever; if this hasn’t already been proven by the rest of the album, then the four-part, 22-minute epic USA will do the job and leave not one shred of doubt in the listener’s mind. It pinballs between styles, an orchestral opening moving into blissful dream-pop without breaking a sweat, Deacon’s lyrics rendered almost unintelligible by the cataclysm going on around him – and that’s just the first part (Is A Monster).

The Great American Desert begins as a sheet of noise and is never any less powerful, with ethereal choirs floating over a beautifully-layered musical soundscape. Part 3, Rail, is arguably America at its most playful, its melodies bounding along eagerly as it becomes busier and busier, sounding like it will collapse under its own weight before the entry of a horn section heralds the record’s climax point. It’s left to Manifest to close the album, and it does so with another blast of percussion, ending proceedings just as forcefully as Guilford Avenue Bridge began them. USA – and by extension, Deacon – deserves plaudits for taking as many risks as it does and coming out the other side completely unscathed. If Deacon wasn’t a force to be reckoned with before, then by gum, he is now.