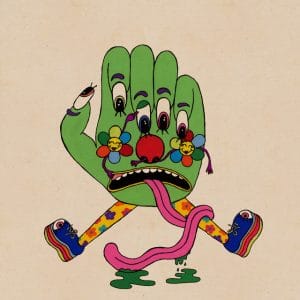 American composer and producer Dan Deacon is a pop maverick, impossible to characterise and even harder to pin down. The sonic alchemist is someone for whom the power of creation and expression holds no bounds; every new song and new project is the opportunity for reinvention and a chance to take things even further. It’s an opportunity he grabs with open arms on his fourth album Gliss Riffer.

The album is a turn away from the grand orchestral arrangements and ensemble works of his previous conceptual albums, 2009’s Bromst and 2012’s America. It trades in some of that grandiosity for something more personal and affecting. As such, Deacon’s own voice is incorporated into the music on a far more prominent scale. Only five of the eight songs here feature vocals but each of them use his voice in different ways.

The general tone is of giddy exuberance. There’s a feeling of wide-eyed wonder to these pieces of idiosyncratic pop electronica. Lead single Feel The Lightning is graceful and beautiful. A lot of that beauty is down to Deacon warping his voice to sound like the sweetest female vocal you can imagine while setting it against his own robotic Bernard Sumner doing Temptation voice. It’s a wonderful juxtaposition.

Elsewhere, Deacon’s vocal manipulations lift songs like Mind On Fire’s pop rush and mantra like synth tropicalia of When I Was Done Dying to new heights. As is always the case with his work there is lots going on, and the vast amounts of electronic instrumental layering and effects are staggering. And it all works. It sounds almost as if Deacon wants to recreate the feeling and effect of a multi person symphony orchestra on an array of electronic instruments. You cannot quite imagine anyone else making this music.

What really makes Gliss Riffer stand out in Dan Deacon’s discography though is the feeling that you’re being allowed in to his own personal, private world. On exuberant, joyous moments like Learning To Relax, it sounds like he’s truly letting go in a wondrous burst of excitement. Sharing the same sort of melancholic joy of LCD Soundsystem’s All My Friends or New Order’s Temptation, it’s Deacon’s crowning moment so far.

Of course, there is always room for more electronic oddness to offset the starburst pop songs. The three instrumental pieces provide the counterpoint and highlight Deacon’s skill and effectiveness as a producer. Meme Generator is a lovely piece of bucolic electronica while Take It To The Max is a synth odyssey that builds to dizzying rapture. It’s slightly disappointing though that the album ends on the rather inconsequential Steely Blues, a meandering piece of synth experimentalism that lacks the emotional resonance of the album’s previous highs. No matter though, it would take a significant comedown to temper the album’s previous peaks.

It certainly takes a tremendous amount of skill to weave together all these myriad flights of musical fancy into a coherent work. It’s a challenge that Dan Deacon is easily up to.