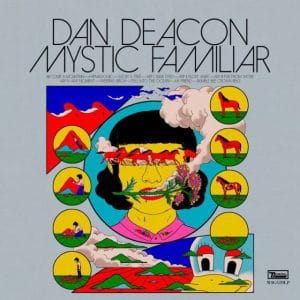 After a few years away working on film soundtracks, Dan Deacon is back with another studio album full of whimsical lyrics, intense rhythms and bright, sunny synths. Breezy pop structures are undercut by experimental sound design, a playful spirit buoying up the record throughout.

Mystic Familiar opens with the piano chords of Become A Mountain, notes billowing on top of each other in a constant crescendo that cuts off abruptly for the song’s end. It starts the record as it means to go on, with digitally enhanced flourishes that reappear in cello form for Weeping Birches, and endearing lyrics about a form of self-actualisation (“Close your eyes / and become a mountain / become all around you / become the skies, become the seas”).

Sat By A Tree continues Deacon’s maximalist bent, featuring a driving beat and sheets upon sheets of synth as vocoded vocals burble underneath, while My Friend’s busy bass ostinato sets a steady pace to contrast with the frenetic drums and synth. Roughly halfway through the record is a four-part opus lasting a total of 12 minutes, perfectly paced from build-up to breakdown to build-up to extended fade-out coda, anchored by a soaring chord sequence and repeated vocal verses that feel truly euphoric in the context of such an odyssean structure.

Fell Into The Ocean is a relatively conventional tune, grooving along much like an ’80s synth-pop tune with its nifty hook and laconic bassline, and serves as the calm before the storm of the album’s final two tracks. Closing track Bumble Bee Crown King establishes a chordal drone and watery guitar lines before becoming overpowered by Deacon’s modern-day Wall Of Sound, and by the time its components have finished their ascent into the ether the overall effect is exhilarating and smile-inducing.