Dan Deacon – Spiderman Of The Rings 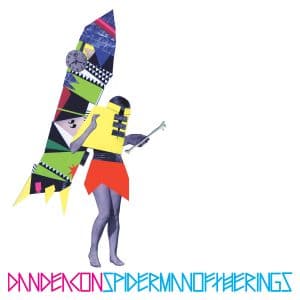 Dan Deacon live is intense. Surrounded by an abandoned frenzy passing as an audience in the middle of a room, the floor of which is throbbing, his electronics wire together to make an almighty and sustained racket. In the middle of them is a small, tubby guy from Baltimore.

His large glasses are held together with duct tape, giving him a look like the bastard love child of Timmy Mallett and Lord Birt. Above him is a luminous green skull housing a strobe light. You would not believe the bass. If your ears can take the assault, it’s an experience you need to chalk up.

Dan Deacon on record is a mixed bag. He doesn’t look at you through those glasses because of course he’s not there. Nor is there a trippy green skull peering down at you. There’s space for some ambient, twinkly changes of pace, allowing the bona fide anthems of the record – Crystal Cat and Wham City foremost among them – to sparkle like the lunatic gems they are. But those relatively relaxed moments underline Deacon’s classical training and his ear for melody. His compositions, capable of raising roofs in venues wherever he and his skull pitch up, on record sound more intricate and intimate than expected.

The record in question is Spiderman Of The Rings and it’s the first of Deacon’s seven albums to get a UK release, which at first seems something like criminal until one becomes aware of his prolific nature. All those records have been released since 2003. But Spiderman Of The Rings is the first one to mix together his vocal tricks, party anthems and those surprisingly calming instrumentals.

Like a cartoon character enjoying a chemmed-up night out, Deacon’s joy at music creation is not just obvious, it is rammed home with children singing along here and hyper munchkins wibbling gibberish there. Some of it goes beyond surreal into mildly unsettling territory. At times the sounds he creates suggest he’s seeing what he can get away with. And why not? With a Casio, a sine wave generator, a tabletop full of pedals and sundry other gizmos and a mic and vocoder as his instruments of choice, he’s certainly of the now, and now sounds like a fun place to be.

Those anthems aside, Trippy Green Skull sends up heavy rock and krautrock and still has a ball doing so. Okie Dokie is gibberish for rhythm’s sake. Big Milk sits somewhere in the same galaxy as Matmos stealing Amiina‘s glocks. Pink Batman is a gorgeous mix of sounds, a veritable junkshop symphony.

Over the course of just nine tracks it doesn’t always hold attention, tailing off towards the end almost as if his attention span ended halfway through making it, but it doesn’t outstay its welcome. Deacon’s done enough to set out his stall – Spiderman Of The Rings is a decent, varied and exciting album. Yet it’s really only a calling card for Deacon’s live shows. It’s there that Dan Deacon comes into his spectacular own.