Dan Le Sac vs Scroobius Pip – The Logic Of Chance 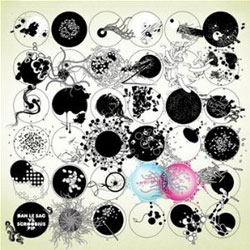 How does any band recover from getting a 0.2 from Pitchfork? Dan Le Sac vs Scroobius Pip’s 2008 debut Angles was practically gang-raped by reviewers, their vitriol ranged at everything from rapper Pip’s breathing technique to the duo’s Essex background. Arguably they were rather asking for it: any band whose name takes that long to scroll across an iPod screen invites derision, more so when it’s referencing obscure 19th century poetry.

That was the real critics’ bugbear: the pretension. When you name yourself after a character in a nonsense poem that defies description or genre-pigeonholing you should expect a ripping, particularly when your lyrics aim to address ‘real issues’ from a position of moral authority. We don’t tend to like it when our CDs preach at us, especially when we can’t even say the preacher’s name without feeling faintly embarrassed. Yet Angles didn’t quite deserve the savaging it received. Heck, parts of it were really quite good, although the album as a whole was blighted by not quite seeming to know what it wanted to be: it railed against mediocrity whilst lambasting the high-brow, and spun narratives about suicide whilst claiming to desire “just some bit of good new-fashioned fun, y’all”.

So, two years on we have The Logic Of Chance, which wrongfoots us from the off with an unexpected note of contrition. “I do not know everything/Hide behind this pseudonym/ I do not presume to be right,” raps Pip on opener Sick Tonight, although any humility is quickly drowned by a torrent of verbosity and flagrant moralising, well-intentioned though it may be. That said, Dan Le Sac does a great job at leavening the more earnest moments, dark beats and driving bass setting a danceable yet distinctly unsettling mood throughout.

It’s a shame, then, that the remainder is so very very bad. It starts going wrong with first single Get Better, which manages the feat of getting worse the more times you hear it. Musically it’s fine, but lyrically it’s like being trapped in a strip-lit room with a particularly eager youth worker, forever. It’s hard to argue with the message itself – essentially a plea to the young to use contraception and educate themselves as best they can – but the medium seems wrong: whilst music can and definitely should tackle difficult themes this is too didactic, too artless, too desperate to impress or make a point. “Imagine a song that really reached out and touched kids,” it begins, and every kid that it’s trying to reach out to starts frantically flailing in the direction of the sound just to make it stop, before going back to rutting aimlessly and burning books on an enormous pyre simply to spite it.

It’s patronising, frankly, and it goes on far too long. So – with the exception of the actually pretty good Stake A Claim – does the rest of the album: Cowboi is so execrable it actually doesn’t warrant comment, whilst Snob asks us to “stop being a snob with your music”, which would be a lot easier if it didn’t sound so much like a bad DJ Hero mix with one of the more irritating samples stuck on infinite loop. The Beat, meanwhile, informs us that “this ain’t about your brain/ It’s all about your feet”, which would be fine if it didn’t contradict everything the album has previously told us.

Ultimately The Logic Of Chance suffers from the same indecision, the same veering tone, as Angles: are we being taught here or just having a good time? It’s like being back in Scouts, where we’d spend an hour climbing trees before having to line up and learn about the Queen, and it’s really too jarring an experience to be able to fully recommend. How you view this album will very much depend on your response to the last one: there will, undoubtedly, be many who lament that the bullet entering Scroobius Pip’s head in the second track is fictional. They really need to exercise some quality control.