Daniel Knox – Won’t You Take Me With You 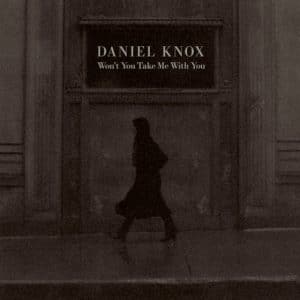 Chicago-based songwriter Daniel Knox is a musician with an unusual backstory: he has worked as a late-shift cinema projectionist and taught himself piano on ramshackle instruments in the city’s hotel lobbies. This lived experience is echoed in the world weary, late night ambience of his records, which sit somewhere between the rambunctious vaudeville of Tom Waits and the wistful elegance of Richard Hawley. Knox has also collaborated with David Lynch, performing a piece of music on the Chicago Music Box Theatre’s organ alongside a screening of the great man’s Inland Empire film, which gave him his first big break back in 2007.

Knox’s last album, 2018’s Chasescene, was a warmly received collection of characteristically atmospheric songs which featured Jarvis Cocker and Nina Nastasia among others, but very much had his rich baritone at its heart. Follow up Won’t You Take Me With You continues in a similar vein, but with Knox even more central to the sound, without the starry guest turns and revealing a batch of new songs that he dashed off in just a matter of weeks, in stark contrast to his usual painstaking approach.

Lyrically, Knox remains a distinctive storyteller, interested in unfulfilled, tormented small town lives, failed relationships and unsolved mysteries. Over his back catalogue, he’s created his own private universe, existing on the fringes of the reality, and those familiar with his work will recognise narratives and characters that appeared on his earlier records.

It may have been written and recorded in double quick time, but Won’t You Take Me With You is still an impressively assured, fully realised record. It kicks off with the quintessentially Raindogs-era Waits barroom piano and squalling woodwind of King Of The Ball, followed by the woozy (and very Lynchian) lounge-jazz of Vinegar Hill, but switches mood thereafter, with most of the remaining songs occupying sombre ballad territory.

Highlights include Fall Apart, a haunting study of a bitter break up, the lushly sad Fool In The Heart and above all the majestic Girl From Carbondale, a tragic tale of loneliness and loss set to a ragtime rhythm backed by weeping strings, which gently meanders to a sudden, jolting stop that seems to signify the ending of pain.

Occasionally, some of the later tracks can feel slightly samey, but No Horizon certainly makes sure Won’t You Take Me With You ends with a dramatic flourish. Built on a simple piano motif, it showcases Knox’s voice to its fullest extent yet, swooping and rolling over swelling layers of orchestra as he recounts an anguished story of disorientation and death. It’s powerful stuff not for the faint hearted, rounding off what’s a sometimes bleak but frequently compelling album by an artist with an unflinching eye for society’s dark underbelly and the characters that inhabit it.