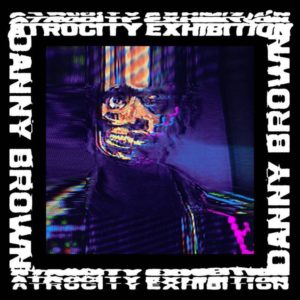 Atrocity Exhibition may be Danny Brown’s fourth LP, but the Detroit rapper doesn’t look at it that way. “I feel like this is the first Danny Brown album,” he said, ahead of his latest release. This view makes sense, too. It can often take an artist several albums to really find their groove – a sentiment clearly echoed by Brown. “Before, I felt like I was trying to fit in,” he added. “But for the first time, I feel like I’m making music for me.”

Although there’s no significant problem with this approach – virtually every musician seeks critical approval – it does suggest Brown was less concerned with what he wanted to do. Atrocity Exhibition is different, though, as the man himself explained: “I know Danny Brown’s sound, and I’m just doing what Danny Brown knows how to.” The end result is a fiercely introspective album, one that feels like a true reflection of Brown.

Opener Downward Spiral sets the tone for what’s to come, with its twisted, off-kilter beat providing the basis for Brown’s lyrics about drug abuse, loneliness and psychosis (“Everybody say, you got a lot to be proud of/ been high this whole time, don’t realise what I done/ cause when I’m all alone, feel like no one care”). It’s dark, depressingly so, but it also delivers a remarkably honest observation on Brown’s post-XXX state of mind.

The perils of success is not a new theme in the rap game, but rarely has it been done with such brutal frankness. “Broke serving fiends/ got rich became a addict/ ain’t it funny how it happens,” Brown raps on the frantic Ain’t It Funny, which points out how ironic it is that he is doing more drugs now than he was when he was selling them on the street. These early days in Detroit are explored further on Tell Me What I Don’t Know, where a stripped back production allows Brown’s ability as a wordsmith to shine.

He certainly doesn’t hold anything back on Atrocity Exhibition, cleaning out his closet in a style that harks back to Eminem at his peak. Brown’s personal conflicts dominate once again on the thrilling, punk-inspired Golddust, which includes more details on his drug-fuelled downward spiral, while everything you need to know about White Lines is there in its title as the restless beat manically jumps around like a kid who’s had too much sugar.

For all the darkness that pervades the record, Brown still knows how to have fun and as Atrocity Exhibition progresses he does show glimpses of his more humorous side. While staying on message, single When It Rain finds Brown in the brash mood that got him noticed in the first place. Then there’s the scattergun production of Pneumonia – one of the few ‘party’ anthems on the album – and the tribal chanting of Dancing In The Water.

Yet the true test of Brown’s progression comes on Really Doe, where he pits himself against Kendrick Lamar, Ab-Soul and Earl Sweatshirt. In many ways it is a standard posse cut, but for Brown it is a rare chance to demonstrate that he can more than hold his own against some of the best rappers around – which he does with aplomb. In fact, the whole of Atrocity Exhibition takes Brown’s craft to a new level, even if his delivery occasionally grates. It’s by far the best thing he’s released and confirms his arrival among the rap elite.