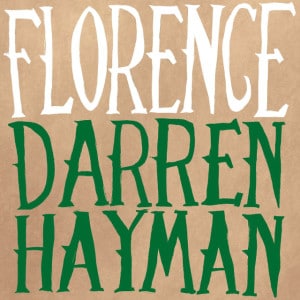 Darren Hayman is nothing if not prolific. When he’s not releasing albums, or finding presumed lost Hefner  7” singles hidden away in storage, he’s recording his next project. Presumably, whilst Florence is being reviewed and toured (hopefully) the next album is already under way. (If it’s not available by the next Spitalfields Independent Label Market, it’ll be a surprise.) For now though, there’s Florence.

Breaking from recent tradition, which has been to record concept albums, this is merely a collection of songs. There’s nothing about the witch trials, socialist pamphlets or lidos here, and it’s quite nice to hear Hayman writing off the leash for the first time in a while. Although the entire album was written whilst visiting friends in Italy, there doesn’t really seem to be much sense of place about the record, this being at least partly down to Hayman’s ability to write songs that reflect universal situations. Although From The Square To The Hill might be influenced by geography, the little nuances cross boundaries; taking the day off (or two – or more) just because you want to, forgetting to take your hat off in the church: these are things that don’t apply to any one place. If there is a theme running through these songs, it’s one of love and relationships.

At times Hayman adopts the position of an agony aunt and offers his advice. On the stripped back guitar/tinpot drum machine strum of Break Up With Him, Hayman points out the multiple problems with a relationship that is clearly in trouble and offers the solution. (After all, if a bloke won’t rub in Savlon cream, then he’s really not worth bothering with.) The final verse suggests that Hayman might not be entirely objective in his advice, but this other guy does sound pretty useless. Later, on Didn’t I Say Don’t Fall In Love With Him, if anything even more musically sparse, he’s offering a shoulder to cry on, even though there’s a slight sense of knowing smugness to that chorus.

Not that there’s anything smug about Hayman’s songwriting: he has a habit of boiling emotions and situations down to their simplest parts, and as delicate as these songs are in terms of construction (simple guitar parts, barely-there percussion and Hayman’s vocals – it’s the first album he’s done as a truly solo artist) they really pack a punch. Take When You’re Lonely for an example, which rages at getting old and offers the rather simplistic advice “when you’re lonely, don’t be”. In anyone else’s hands, such a line would seem glib and a little ridiculous, but Hayman’s attention to detail and that quirky, oddly warm vocal style of his makes everything sad and beautiful at the same time. He makes it feel as if it’s that easy to just not be lonely, just flick a switch and everything will be ok – which, as long as Hayman keeps writing songs like this, it will be.

It is Hayman’s attention to detail that elevates his songs beyond being simple little ditties: the cream in Break Up With Him; the elaborate directions and descriptions of key size in the quite beautiful Nuns Run The Apothecary. Safe Fall describes a woman who has presumably given up on herself, hair dye growing out, nail paint chipped, losing grip, and wrapped in fleas. There’s no judgement here though, just a prayer for someone down on their luck and finding life a little too much. It’s heartbreaking.

Thankfully there is some respite in the wonky love tale of Post Office Girl, possessing the ramshackle charm of Frank Sidebottom, as Hayman sings and then posts a song written specifically for the object of his desire, who happens to work in a post office. Somehow, there’s nothing creepy about the lengths to which he’ll go to connect. Final song The English Church has no lyrical insights at all but still manages to conjure up thoughts of a beautiful evening, sunlight cutting through trees and church bells ringing out in a summer haze. Like the rest of the album, it is full of understated charm and is quite, quite beautiful.