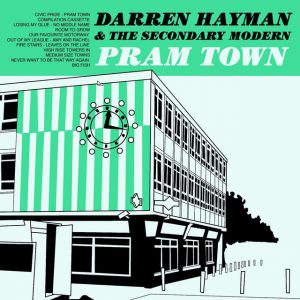 Peter Frampton, at the very end. Rock on. Fire Stairs builds as the song goes on, with potential for lengthy Hey Jude-style live performances – in a good way. And it has some nice violin playing going on the background. You can never have enough violins.

The generally breezy tone then proceeds to take a dip, with suburban ennui, fallings-out and a gentle pace being the hallmarks of Leaves On The Line, as the title might suggest. The lyrical trend continues into High Rise Towers In Medium Size Towns – during the course of which we also discover the reasoning behind the album’s title.

A plummy accent makes reference to the baby boom, and that “Pram Town was the label given by the press some years ago.” Whilst Darren Hayman sings about the legacy of new towns, and isn’t especially full of praise, the tune itself is upbeat, and goes so far as to feature the dulcet tones of a banjo.

Three old lesbians lying in a bed? Good Christ. They’re the first of several groups who feel a distinct lack of space in Room To Grow. There’s a hint of lounge music about this one. Maybe it’s just the blocks being played in the background. Respite from his cramped situation seems to be found in the concluding song on the album, Big Fish, in which he resolves to move out of his present locale. Or that’s the implication, at least.

This is an enjoyable album, musically and lyrically, which depicts suburban life in an amusingly sardonic manner. If you’ve enjoyed previous instalments of Hayman’s many and varied output, this is well worth a listen.