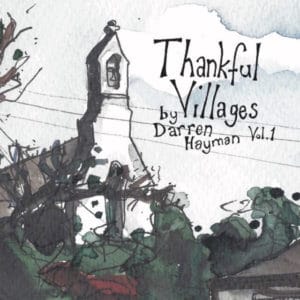 Prolific singer-songwriter Darren Hayman likes to make records that are thematically immersive: recent projects include Chants For Socialists, an album based on the poetry of Victorian writer, designer and all round good egg William Morris; Lido, an album about outdoor swimming pools; and The Violence, a double LP about 17th century Essex witch trials. Often, as with Lido and the Essex Trilogy that culminated with The Violence, these concept albums are grounded in particular places, and that’s very much the case with his latest project.

A Thankful Village is a village to which every soldier who fought in World War I returned home alive. The term was popularised by Arthur Mee, a chronicler of England, who described the concept in his guidebook series The King’s England. Hayman has identified 54 such villages in England and Wales and has set out to visit each of them, recording a track and making a short film inspired by each settlement.

Volume 1 includes the first 18 recordings and, although they form part of a larger project, they can be listened to on their own account. Hayman has begun an excellent blog on which he posts the films that accompany each track, along with commentary on his trip to the villages and how the songs came about. This is a helpful companion to an album which without background elucidation risks feeling rather underwhelming.

Of the 18 tracks only seven or eight can truly be described as songs in the traditional sense; the remainder are a hotchpotch of lo-fi instrumentals and narratives set to music that include poems, accounts from residents of the villages, and in one case a reading from The King’s England. The pieces are mainly acoustic; in many cases the tracks, or elements of them, were recorded on location using instruments that Hayman has carried with him on his travels, and on a couple of instances the organs of village churches. Field recordings, choirs and snippets of dialogue are included.

This is a record that demands a certain level of concentration. It’s not background music or something to dip in and out of, but one can imagine spending a relaxing hour listening to the whole album and absorbing the sounds, stories and histories that it contains. But when the album is taken in isolation the jumble of sounds and stories seem to add up to less than the sum of their parts.

Add in the backstory and Hayman’s commentary, however, and you are treated to something far more rewarding, as you realise that what is being documented in the Thankful Villages project is a whole way of life. The pieces inspired by these villages are not in most cases about World War I, and in many cases they say little or nothing about the locations: the Thankful Villages theme is significant mainly in that it has provided Hayman with a disparate list of settlements to visit and write about.

Many of these villages are tiny hamlets, and listeners are unlikely to have heard of more than a handful of them, if any. But when you listen to the tracks inspired by them, and read the backstories, you realise that this isn’t about the specific places. Learning of conversations with church wardens (churches and their wardens are recurrent figures in this project and in the communities documented here), Remembrance Day services, church windows and songs written in graveyards, you come to understand that the Thankful Villages project is a clever and sensitive piece of social commentary and history. As an album it is of questionable value, but its ambitions are much bigger than the album form.