by Sam Shepherd
published: 26 May 2017 in Album Reviews
Tweet 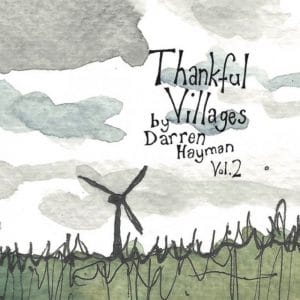 A Thankful Village is a settlement where all the soldiers who went to fight in the First World War came back unscathed. There are 54 such villages around the country and Darren Hayman has decided to document them all in a series of brief snapshots of song and sound.

On his second volume of these works, some tracks appear to be little more than very brief sketches of musical ideas rather than tales of war time heroics and survival. But where the project succeeds is in attempting to capture something tangible of the locations that inspired these pieces. Anyone expecting fully realised songs might be disappointed, but they will also be missing the point.

Take the track Tellisford for example; little more than a field recording of wild river swimming on a summer’s day set to a simple guitar accompaniment, but somehow it manages to capture the essence of a carefree summer’s day. Hayman is a master of capturing the essence of his subject, not matter how sparse the music he utilises, and this album is filled with magical examples that are infused with spirit and emotion.

Of course, it’s not all fun and games in the river, and Cromwell covers what happens when there’s been a drowning at the weir (again, the music defers to the narrator) whilst Arkholme sets a centuries old story of a mass drowning on bonfire night to an emotive backing.

Elsewhere, more modern stories are covered. Flixborough for example is a series of accounts about the chemical factory explosion in 1974 that devastated the village. Interestingly Hayman soundtracks these eyewitness accounts with a surprisingly laid back accompaniment, but perhaps that mirrors the matter of fact re-telling of the story, which includes an account of limbs landing in the gardens of the locals. Colwinston’s story is a little more cheery and covers the annual Collyball event, which involves rolling swedes down a hill. It’s a sport that started out using cauliflowers, but the residents found that they fell apart too easily.

The fact that these stories that Hayman has unearthed can range from simple fun days out, to tales of death, to idiosyncratic traditions (Collyball’s status as an ancient pastime is completely made up) is what makes the Thankful Villages project such a success. Village life is strange and funny, but it can also be dark and depressing, and that’s exactly what has been captured here.