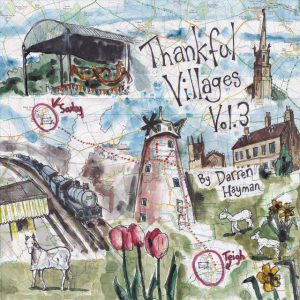 A Thankful Village, as listeners to the previous two volumes of Darren Hayman’s album series will know, is one in which all of the men who left to fight in World War I returned home alive. There are 54 such villages in England and Wales and, since 2015, Hayman has travelled to them all, making a piece of music and a short film in each. Fittingly, the third and final album to emerge from the project arrives a couple of days ahead of the armistice centenary.

However, the series isn’t specifically about World War I or its aftermath and effects. As noted in the header of Hayman’s excellent Thankful Villages blog, the undertaking is simply ‘A project about rural life by Darren Hayman’. The Thankful Villages theme (the term was guidebook author Arthur Mee in the 1930s) might add some degree of poignancy to the music but it is essentially a vehicle that has allowed Hayman to choose a random sample of villages to visit and document. What results is part musical project, part social history, part commentary on contemporary rural life.

As the context makes clear this isn’t a conventional album by any means. Some of the tracks take the forms of songs, including original compositions and recordings of folk songs meaningful to the location; others include field recordings or, often, oral histories from residents of the villages. The theme provides some form of continuity, but the style swings from track to track – the eerie East Carlton, which strings together snippets or dialogue over a tense canvas of electronic sounds, is followed by Hunstanworth, which begins with a child reading a poem and then segues into an acoustic piece sung by Hayman with what sounds like a school choir providing backing vocals.

This patchwork effect is the result of Hayman recording each piece on location – it’s not a case of him travelling to a village, making some notes and returning to the studio to record a song. It lends immediacy to each track but does mean that the album sometimes feels a bit disjointed. One might argue that this is all about the diversity of the villages profiled – multiple settlements that look pretty much the same if you simply drive through will each have their own specific character and community – but the listening experience isn’t always the easiest.

Having said that, the release of Thankful Villages Volume 3 provides a good excuse to go back and listen to volumes 1 and 2, and this turns out to be the strongest of the trio. There are some great moments here, such as the jangling folk of Ousby, the story of a reverend jailed during World War II for being a Nazi sympathiser in Teigh, and the charming opening to Saxby: “Would you like to listen to a steam train coming into Saxby station in 1957?” asks Hayman, to which his audience chorus in the affirmative.

Best of all is Minting, in which Hayman goes wandering with a metal detectorist, and learns of the buried physical history of the village, culminating in the discovery of a Chinese coin (“number four from this village […] about 1840, I suspect”), as we are left to wonder whether the name of the village is simply a coincidence. The backing music ambles along merrily enough but after a while beeps of the metal detector interject and at times sound harmoniously with the guitar, the machine actually becoming an instrument in the piece. It’s an instance of the Thankful Villages project at its very best; music and history coming together seamlessly.