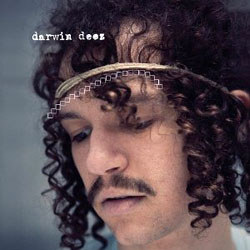 Is Darwin Deez a man or a band? If he’s a man, does he even have a band? He certainly alludes to bandmates on his website, but the Darwin Deez sound bears all the hallmarks of a soloist: a drum machine, a couple of layers of guitar, idiosyncratic lyrical turns. What is clear is that this young John C Reilly lookalike is entirely worthy of the buzz that surrounds him.

Originating from the perpetually cool New York scene, the intriguing Darwin is a Baba Lover – following Meher Baba’s teachings that cheerfulness has a spiritual value – and concedes with refreshing honesty that his clean lifestyle is at odds with a booze-soaked indie music movement. Far from self-righteous, however, this debut LP exudes the kind of rhythmic, enticing lo-fi that made early Beck records such potent sleeper hits.

Constellations, indeed, sets out the album’s stall with bright, simple aplomb: interesting chord shapes – coaxed from an even more interesting four-string, uniquely tuned electric guitar – ring out over a chirpy synthesised drum beat while Deez alternates between deadpan and falsetto like a upbeat Julian Casablancas, name-checking, among other things, Twinkle, Twinkle, Little Star.

Deep Sea Divers carries the torch further, its unhurried sequence flourishing into a beautiful, delicately chiming chorus, the curiously literal lyrical content conjuring imagery of discord between two divers sat on the ocean floor: “Little yellow fish go past your sullen face / Shouldn’t you smile once in a while?” It’s a real standout track.

Adhering closely to the aural mode he’s established early on – as all good lo-fi purveyors should – it appears that Darwin Deez relies on the strength his own songwriting rather than employ any clever audio tricks, gimmicks or shortcuts. Devoid of such smoke and mirrors, the album is allowed to trade on its own bare virtues, and benefits accordingly.

As early as track four, for instance, there’s little left to guess about the album’s auditory spectrum, and yet Deez has the aptitude and nous to manipulate his formula into fresh and interesting shapes: DNA trades on cutesy muting, the protagonist attributing diminishing charm to being “down to six or seven chromosomes”; Bed Space relates an echoing tale of impromptu, heartbroken space travel.

Clocking in at just over half an hour, the album is utterly devoid of filler, and the treats continue until its conclusion: Radar Detector is the lead single and an irresistible anthem already taking up residence on the airwaves; Bad Day wishes the very worst on a mystery subject but remains charming, even uplifting.

And the parallel drawn with Casablancas is no throwaway remark: the album’s overriding impression is that it is an album cut from the same cloth as The Strokes‘ This Is It – bright, clean melodies with just a touch of gain, song structures you’re hard pressed to forget – and an effort that marks Darwin Deez as one of the foremost exhibitors of compelling lo-fi.