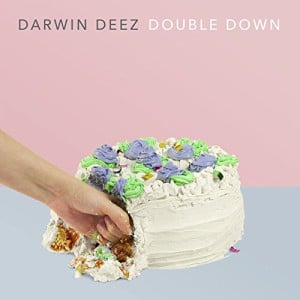 While most musicians are at pains to big up the differences between their new album and its predecessors, Darwin Deez is keen to emphasise the similarities between Double Down and the two albums that came before it. Its title, apparently, “refers to my intention to repeat myself”. He’s even gone on to draw a bizarre parallel between his three albums and the Ridley Scott triptych of Blade Runner, Alien and Prometheus – “they have so much in common, yet I don’t feel a second of boredom”.

It sounds like a facetious comparison, but Deez (born Darwin Merwan Smith) isn’t being entirely fanciful. Double Down is built from the same basic components as its predecessors – chunky guitar riffs, rickety drum machines and scuttling basslines – but he’s found a way to shuffle those components around into fresh arrangements – some good, some decidedly less good.

Deez has always been more popular with television edit producers than with record-buyers. Anyone in possession of a TV set is likely to have come across the crisp riffing of Radar Detector, Constellations or Deep Sea Diver off the first album at some point in the last five years, unwittingly or otherwise. Nothing on Double Down is likely to generate similarly substantial PRS cheques. Lead single and first track Last Cigarette has all the elements in place – clean-sounding guitar tones, a brisk tempo and a simple lyrical conceit which compares quitting smoking to romantic procrastination – but the chorus underwhelms.

Strangely for an artist who’s never been known especially for his ballads, Double Down’s noisest numbers are its weakest. Lover and Time Machine both become bogged down under a morass of cross-purposes guitars, quirky sound effects and weird non-sequitir lyrics (“Get the fuck out of my face / I do not care for your parakeet” goes the former). Meanwhile, Rated R’s tedious film certificate analogy would be more tolerable if it weren’t allied to a hulking, inelegant melody.

Perhaps Deez is growing bored of playing the clown, because the album’s best moments arrive when he stretches his range. The comparatively gentle pop-soul number The Mess She Made is blessed with a vocal melody redolent of Prefab Sprout; Bag Of Tricks is a pop-soul number that proves especially welcome when coming straight after Rated R; Melange Mining Co and The Other Side hit that sweet spot where euphoria and melancholia meet, while Kill Your Attitude has a lovely, unexpected chord change in the chorus that’s reminiscent of Squeeze at their peak.

For an album that clocks in at under 40 minutes, Double Down can prove surprisingly hard work at times. Its lowlights are truly grating, but fortunately they’re outnumbered narrowly by some very palpable hits.