Daughter – If You Leave 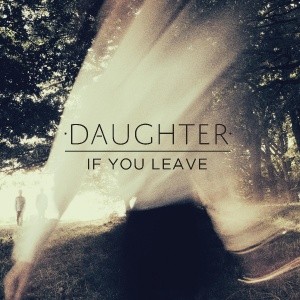 Some albums are almost too painful to listen to. When an artist pours every ounce of their soul and being into their music the result can be thrilling, particularly when the insights offered open the doors to experiences that may well be totally unfamiliar. The emotional honesty that informs every second of Daughter’s first album is so raw and so damaged that it actually becomes quite frightening.

Vocalist Elena Tonra is so open throughout If You Leave that there are times when the only response is one of worry for her well being. Those familiar with the psychological torment of grief and despair bought about by death or the breakdown of a relationship (or indeed chemical imbalance) may find If You Leave to be the sonic equivalent of picking a scab. It is painful and comforting at the same time.

The comfort comes in two forms. Firstly there is the quite beautifully orchestrated music provided by guitarist Igor Haefeli and percussionist Remi Aguilella. Pitched somewhere between folk and dreamy shoegaze, these songs are steeped in timid guitar lines and washes of ambient delay. Quite often there is very little to grab hold of as ideas and melodies appear from out of the mist and fade quickly before they register. This leaves plenty of space for Tonra’s voice which is constantly beguiling. Stripped of lyrical context her vocal delivery continues to reflect her state of mind perfectly as she changes personas frequently. The music also shifts in tone, echoing Tonra’s mood. This is particularly noticeable on Youth where rumbling drums come thundering out of the clouds of guitar fog. When they fade, Tonra’s left alone in the silence, before they roar out again, but she’s still alone in the storm.

Sometimes haunted, sometimes forceful and driven; tonally she’s a confusing mix of emotion. There are moments when she sounds not unlike Björk or Florence Welch, but predominantly, it’s the breathless, haunted delivery of Portishead’s Beth Gibbons that springs to mind.

The second form of comfort is reliant entirely upon Tonra’s pain, and comes from the knowledge that someone else has experienced these feelings. Most of these songs are about the isolation that occurs in the aftermath of a relationship breakdown, and anyone in the throes of something similar will find her lyrics a brittle raft to cling to. Presumably she wrote these songs, as a form of catharsis and connection, and even those who can’t identify with what she’s expressing will feel the urge to offer a hand of salvation.

Constantly wrestling with how best to proceed and her psychology, this is a troubling glimpse into mental anguish. During the disarming pop chant of Human, she describes the prison of her skull and recognises protective but isolating cocoon of grief as she flits between the will to live and the oppressive feeling that she may already be dying. Touch meanwhile finds her desperate to “feel something”, which is a need that anyone who knows the deadening effects of anti-depressants will associate with quickly.

Elsewhere, love is described as a disease, emotionless sex is pursued in order to feel worthwhile, and therapy is considered the heartbreak of tomorrow. It is almost unbearable, as Tonra aligns images and phrases of death with sunkissed holiday images and an underlying knowledge that a relationship will end in a matter of hours. “Don’t bring tomorrow cause I already know I’ll lose you” is a desperate plea that can only fail in the face of the inevitable, leaving nothing but a pile of bones and never studied holiday snaps.

Heavy it most certainly is, but Daughter succeed simply by creating phenomenally beautiful music and heart-rending songs. It’s Tonra’s album though as she lays bare the pain of human relationships, all of which must end, and makes it clear that it is entirely possible to feel everything and nothing at the same time. This is an album that perfectly recreates a state of mind that isn’t particularly healthy, so when she sings during Amsterdam “I was thinking that I should see someone, just to find out that I’m alright” it’s hard not to disagree. What is certain however that is If You Leave is one of the most stunning, and emotionally captivating records you’ll ever hear. It’s made all the more powerful by Tonra’s willingness to be unflinching in exploring her grief. As an act of catharsis, it can only be hoped that it is successful.