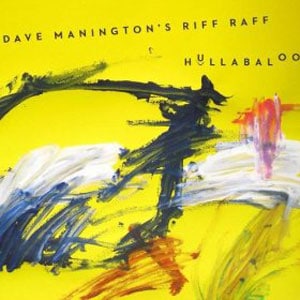 For this release, London based bassist and composer Dave Manington has assembled a tantalising roll call of contemporary UK jazz talent. Saxophonist Tom Challenger has already demonstrated his creativity and urgency in a number of ensembles including Outhouse and {Ma}, whilst Ivo Neame is currently one of our most in-demand pianists, working with the likes of Phronesis, Kairos 4tet and rising star drummer and bandleader Dave Hamblett. Guitarist Rob Updegraff adds blues-informed bite and subtle colours and shadings, whilst drummer Tim Giles remains one of the most dexterous, fluent and authoritative musicians on the scene.

Perhaps the strongest presence here though is vocalist Brigitte Beraha, surely one of only a few singers who possess the confidence and skill to handle Manington’s often tricky, unpredictable melodies. Beraha also possesses a deft musicality that enables her to blend perfectly with other instruments in a perfect balance, either when delivering melodies or when providing backings for soloists. Her improvised contributions are a consistent delight.

Manington’s music here makes a virtue of its sly awkwardness. The pieces are mostly long and restless, veering through a number of different moods and approaches. The themes take unpredictable turns and emphasise tricky intervals, whilst the instrumentation often feels unconventional (Giles makes plentiful use of auxiliary percussion and Neame sometimes opts for accordion over piano, which gives the sound a very different flavour). The opening Agile is rhythmically playful and imaginative, suggestive of its title in that it treads a fine and dangerous line between adventure and insecurity.

Oddly, the title track is relatively ghostly and restrained, with Beraha and Challenger providing interlaced lines over fluttering brushed drums and restrained guitar chords. It’s a curious, sensitive and eventually fascinating piece. The constant shifts in instrumentation make for a multifaceted collection varied in sound and texture. Ivo Neame’s electric piano on Water Torture provides a very different approach and, appropriately given its title, it is this album’s most edgy and menacing composition, executed with real precision. Neame’s nimble, quickfire solo is a mind boggling delight.

The concluding Not A Wordless Thing allows Rob Updegraff’s incisive improvising to cut through brilliantly, whilst the wryly titled You Can’t Eat Crips To That provides the ensemble’s deepest exploration of rhythm and groove. Throughout these shifts in tone and style, Manington manages to sustain a coherent compositional voice that is intricate, atmospheric and playful.

Whilst Beraha’s vocals are mostly wordless, a couple of the pieces are songs with lyrics. Catch Me The Moon begins with something of the evocative, hushed majesty that made Patricia Barber’s Mythologies such a wondrous set, but the ideas are piled on thick, and the intensity and range of the melodic line ratcheted to an extent that arguably detracts from the lyric rather than supporting it. The atmospheric Pedro Bernardo, ushered in by Updegraff’s swathes of sustained, effects-laden guitar, is much better, with a subtle and intuitive impetus, and a palpable sense of mystery.

Although it is filled with contemporary jazz tricks and some tremendously inventive playing, Hullaballoo never quite reaches either the brawl of sound suggested by the ensemble’s name, nor the calamitous energy suggested by the title. In the end, it’s a much more subtle statement, highlighting flighty, aspiring melodies, textural variation and showcasing the thoughtful improvising of the entire ensemble.