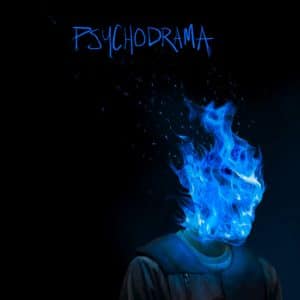 The name Dave has had a bit of a rough ride in recent years. Whether it the long-running punchline of an Only Fools And Horses gag, or being named after a satellite channel seemingly dedicated to endless re-runs of comedy panel shows, Daves have lost a bit of lustre. That’s not even mentioning a certain Old Etonian who set the UK on the path we’re currently hurtling along before scarpering.

However, David Orobosa Omoregi is here to change all that. For the last couple of years, Dave has been quietly carving out a name for himself as one of UK rap’s sharpest voices. His most impressive performance to date was 2017’s incendiary Question Time, in which he tore into politicians of all hues for their failure to act over the Grenfell Tower tragedy. It was one of those songs that make you stop still and listen as soon as you heard it, and although it doesn’t feature on Psychodrama, there are several moments that equal it.

For Dave’s debut is quite the statement of intent: an album that not only meets the hype but exceeds it. Many of the tracks are downbeat, built upon some melancholic piano chords (Dave himself is a Grade 7 trained pianist), but its Dave’s delivery and lyrics that are truly startling. Recent single Black caused a stir when Radio 1 DJs like Annie Mac found themselves having to defend the song’s lyrical content from people who were, somewhat bizarrely, offended by it.

There’s nothing offensive about the song, of course. Instead, it’s a deftly written analysis of what it means to be black in the present day, touching on police shootings, history of lineage and racial appropriation. It’s the sort of articulate discussion of race that, frankly, should be taught in schools, and the fact that it’s set to a melody that sits in your head for days after the first listen is even more impressive.

It isn’t the only weighty subject matter discussed on Psychodrama. Mental health is tackled on opening track Psycho, in which Dave struggles with mood swings (“I think I’m going mad again, it’s like I’m happy for a second, then I’m sad again”), insecurities (“What if I don’t leave a legacy”) and his career pressures (“I’m a hitmaker if you ever noticed, I could be the rapper with the message like you’re hoping”). Environment is an impressively articulate take on black culture and what it means (“You see our gold chains and our flashy cars, I see a lack of self-worth and I see battle scars”), while the closing track Drama is an open letter to his brother Christopher, currently serving a prison sentence for being involved in a gang murder in 2012.

The album highlight though is the 11 minute long Lesley, which tells the story of Dave meeting the titular character on a train and hearing about her life. He deftly turns the song into a takedown of toxic masculinity and domestic abuse which becomes “a message to a woman with a toxic man, I’m begging you to get support if you’re lost or trapped”. It may be over 10 minutes long, but not a second is wasted.

It’s rare to hear a debut album so confident and accomplished, especially when the artist himself has just turned 20 years old. Yet Psychodrama is pretty close to a masterpiece and raises the bar for a new standard in British rap. Daves can hold their heads up high again.