Dave – We’re All Alone In This Together 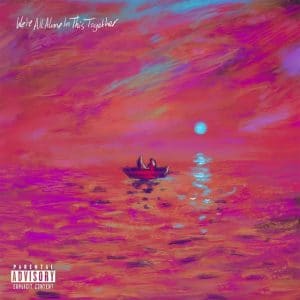 It’s fair to say that Dave made quite an impression with his debut album Psychodrama. As well as winning the 2019 Mercury Prize, he also turned into a show-stopping performance at the BRIT Awards, and a clip of his Glastonbury set went viral, thanks to a 16 year boy called Alex being brought on stage and rapping the lyrics to Thiago Silva equally as well as Dave.

So in a few short months, David Orobosa Omoregi has quickly elevated to the top echelon of UK rap, and there’s a suitable sense of occasion surrounding We’re All Alone In This Together. Anyone who was captivated by Psychodrama will find much of the same on the successor – articulate, politically aware rap, featuring Dave’s classically trained piano. The guest list may be a bit starrier – Stormzy and James Blake amongst others – but this is Omeregi’s vision all the way.

There’s also a breadth of ambition displayed on the album that sets Dave apart from his peers. Whether it be a 10 minute track taking in immigration, knife crime and racism, or an impassioned, beautifully affecting ode to the Windrush generation, there’s an immense amount of care lavished on each track.

Just as Black was the epic centrepiece to Psychodrama, here it’s that aforementioned 10 minute track, Heart Attack. Dave’s delivery is utterly compelling to listen to, as he weaves a hugely complex tale taking in street violence and drugs on the South London streets. When Dave’s mother appears at the end, recounting tearfully about when she first came to live in the country, it’s enormously affecting.

Almost as moving is the beautiful James Blake and Shasimone collaboration Both Sides Of A Smile which tackles the disintegration of a relationship, dominated by Blake’s signature falsetto vocals and mournful piano chords. Then there’s a track that has the power to stop you right in your tracks, such as the Windrush-referencing Three Rivers, a tale of immigrant experience so poignant and articulate that it should be taught in schools.

It’s not all doom and gloom though – there are several more pop-dance crossover tracks on We’re All Alone In This Together, including System and Lazarus which sit bang in the middle of the album, adding some necessary light to the shade elsewhere. Then there’s Clash, the swaggering duet with Stormzy, already a huge hit, which namechecks Jeremy Corbyn, Alan Sugar, Piers Morgan and Viola Davis. It’s a timely reminder that, despite the huge political presence on the record, Dave also knows how to have fun.

By the time that Survivors Guilt closes the album, with its clanking percussion and eerie backing vocals, you’re convinced that Dave has not only equalled Psychodrama but possibly even surpassed it. It’s the album that disproves the myth of the ‘Mercury Prize Curse’ and also consolidates Dave’s reputation as one of this country’s most important and impressive young artists.