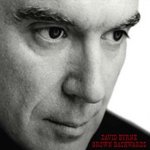 Imagine you’ve just met a nice young lady – trendy, bright etc. – and you’ve managed to get her upstairs for a coffee. If you want to impress her with a show of your musical intellectuality, then David Byrne’s latest offering should fit the bill nicely. So retro it’s avant garde, yet still highly accessible, and not “out there” by any means; cosmopolitan sophistication is written throughout, which (hopefully) reflects on you.

Musically this is a varied album, but for the most part modern genres have been abandoned – particularly the electric guitar – in favour of a loosely orchestrated string and percussion ensemble. The rhythms are mainly provided by the smaller percussion instruments; maracas, castanet and bongos. Melody is delivered both vocally and via various instruments such as xylophone, guitar and often a string section.

This works well with Byrne’s rather accent-less voice, to give a kind of school musical effect, like an unravelling play and sounding a little like Noel Coward numbers in places, which is especially notable on The Other Side of This Life. Civilisation, meanwhile, is a verbal montage of the various observations thrown up by being unusually insecure for a typical dinner date.

On other tracks a more conventional classical arrangement is used, perhaps unsurprisingly, as he gives us his very own rendition of Un di Felice, Eterea from La Traviata by Verdi and also a song by Bizet. Byrne’s success here is limited, as he hasn’t the strength to really deliver operatics, but his voice certainly conveys a listenable amount of passion. At least the result is interesting and agreeable, whereas for many performers it would be laughable and derisory.

Interspersed are also some slightly more modern influences, for example the jazzy calypso of She Only Sleeps and the funky horn section of Dialog Box, which are both lively and enjoyable tracks. The only tracks which really fail for me, are Pirates, which is rather meaningless and insignificant, and Glad, which is lyrically smug and a bit repetitive and tiring.

In Empire (and briefly in Astronaut as well) he begins to address the recent savagery of American neo-colonialism, but in a mawkish, rather too personalised way. Truly though, David Byrne isn’t at his best with universal themes, and his strength really lies in the depiction of the purely personal events which are mediated by the odd characters, and their odd traits, which obviously intrigue him.

The album is worth giving some time to and certain tracks really shine, such as Glass Concrete and Stone, which is both lyrically and melodically very beautiful. A cover version of Lambchop‘s The Man Who Loved Beer is rather impenetrable, but interesting and poignant all the same. Tiny Apocalypse captures well the confusion and isolation of modern man and the discontinuity between the received message and the perceived reality. Byrne takes his opportunity to remind us of the background hum that modern society suffers from – the unassailable fear of failure and what’s going to happen when things go badly wrong.

Grown Backwards is an album to listen to. It doesn’t really work as background music, so your young lady will probably feel the need to comment. Needless to say, remarks like, “What the bleeding ‘ell is this crap?” will probably denote a compatibility issue.