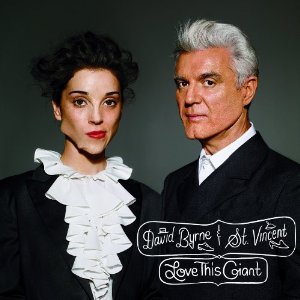 “Try not to laugh – just take a chance,” is the first instruction from Talking Heads legend David Byrne on cut I Am an Ape. It’s not a bad suggestion when it comes to this unlikely marriage of art-pop oddball Byrne and Oklahoma-born guitar shredder Annie Clark, aka St Vincent. Because despite the high wattage of the respective star power involved, it does require a leap of faith for those that presume the 4AD disc has the marks of a novelty train crash written all over it.

But rest assured, the super-hip New York City musical duo have essentially – if nothing else – created a pretty decent Talking Heads album. And it’s only about 30 years too late. Nevertheless, the aforementioned laughs could arise when you consider the wasted guitar prowess of Clark, because there is barely a guitar out of its case on the joint effort. Instead, she seems content to play second fiddle to the silver-haired giant as he repeatedly performs his trademark herky-jerky dance to the licks of the superbly assembled army of brass players. “The more I lost myself/ The more it set my free,” Byrne swears on the swaggering staccato funk of I Should Watch TV – and he’s not joking. After all, this disc marks a triumphant return for Byrne, standing on the shoulders of new musical giants such as Clark, the Dap-Kings and the Antibalas.

And when they all join forces on the album’s standout track The One Who Broke Your Heart they are unstoppable. It’s one of the few tracks that Byrne has crafted in his career that can comfortably hang with Talking Heads anthem Road to Nowhere. It’s a tall order, but he shows that he’s certainly up to it. Oh, and as an afterthought, it’s got a snaking little guitar line, probably from Clark, while the Dap-Kings and Antibalas drop a bucketload of gritty turn-on-a-dime brasskicking grooves to taste.

Or for another highlight, just insert the disc and press play to find Byrne on the pull in the sultry Who as he declaims: “Who’ll be my Valentine?/ Who’ll share this taxi cab?/ Who wants to climb aboard?” The call is presumably answered over the next 11 tracks by Clark. And who’s the happy little boy? Just seconds later he answers: “Who’s shouting hallelujah?/ Who’s going to sing aloud?” Yes, that’s you, David.

Thankfully, Clark does chime in with her elegant singing on most of the tracks and does fight to share the top billing. And where she allows herself a spot of guitar playing, she does it to great effect. She grabs a pick on On The Forest Awakes – albeit four-and-a-half minutes in – to hammer out some luscious, stuttering riffs loaded with electrifying gain. However, the winning formula breaks down on the sappy, schmaltzy Optimist which goes precisely nowhere as it zig-zags from ambient groove to love song to deflated mess.

But for all of the missteps, it’s the moments of dizzying brass playing from the backing musicians, the otherworldly pomp of Byrne and the stellar chops of Clark that saves the day. Sure, it’s best to seek their best work on their own releases. But despite the groovy intentions and the unmissable smell of too many cooks in the kitchen, their album often proves to be pretty damn tasty, indeed.