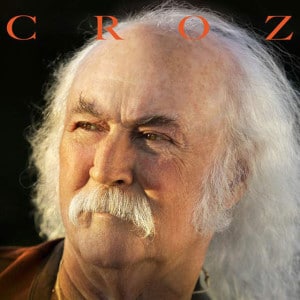 A 20-year hiatus is not insignificant, but in the case of David Crosby, one suspects that such an extended absence can be played down and maybe even overlooked entirely. This, after all, is a founding member of two seminal bands of the 20th century – The Byrds and Crosby Stills Nash & Young – whose contributions to modern music now surely transcend the cycle of record-release-tour, record-release-tour.

Yet there are practical implications to such an elongated dark period, and it’s easily argued that the very fabric of music – and certainly the music business itself – has changed apace since Crosby’s last solo studio album, 1993’s Thousand Roads. That particular effort drew lukewarm responses at a time when R.E.M.‘s Automatic For The People and Cliff Richard‘s The Album sat atop the British album charts. The tumultuous intervening decades must have somehow informed the sound of an industry luminary.

So there’s the inevitable passage of time to consider – and that’s not all. Since his hazy heyday, David Crosby has hit the headlines for the wrong reasons, including a stint behind bars for drug and weapon possession charges. While such discrepancies normally serve as footnotes, background and little else, the old rocker has already pinpointed Croz as an album made for his own satisfaction and nobody else’s; a cathartic, get-it-off-your-chest sort of record. “I don’t think kids are gonna dig it, but I’m not making it for them,” he said in an interview last year, pre-emptively dashing any hopes for cheerful, Marrakech Express-style ditties.

For all the provisos, the LP leaps into life with What’s Broken. Though lyrically weary, it’s a smart marriage of bounding keys, crescendos and choruses, all of which are handily tied together by guest guitarist Mark Knopfler. From there, Crosby makes good on his promise to play for himself rather than try to impress newcomers: Time I Have pairs sparse acoustic guitar with bare-palmed percussion as themes around insecurity emerge (“Cognitive dissonance is what they call it / And I wonder just how small it / Could be made to be / In me”); the introspective Holding On To Nothing adopts a similar soundscape – augmented by a Wynton Marsalis trumpet solo – though its gently-harmonised subject matter is ultimately as bleak as its title (“Sunny days can fool you / They can look wet with rain / And even words from a friend / Can bring back the pain”); The Clearing is at least delivered with gusto, its plunging, minor-chord bridge hanging fantastically in the air.

Hope eventually raises its head in the form of Radio – a full-throated, richly-produced number that lands squarely in classic Crosby territory – while Set Your Baggage Down is the album’s unquestionable highlight, its spangly riff, hearty harmonies and clap-along chorus setting it apart as a toned athlete of a song sat next to a clutch of relatively rotund trackmates. In fact, it’s the perfect storm of Crosby’s indulgence, catharsis and chequered past.

For better or worse, Croz adheres steadfastly to its soul-purging remit for the most part. If She Called, which consists of just vocals and sparse guitar, speculates about the daily miseries of a prostitute, while the album’s penultimate track, Morning Falling, rekindles Crosby’s activist credentials as it explores the anonymous cruelty of death-by-drone-strike. Heavy stuff, but also exactly what the listener has been led to expect.

Croz, like its maker, is something of a curiosity. In an aural sense, it’s perfectly proficient yet frequently bland. Thematically, there is little light and an awful lot of shade. It’ll never go down as a classic of the Crosby canon, yet it is quite unlike anything else he’s ever done. Perhaps it’s best summed up in four simple words – one for the purists.