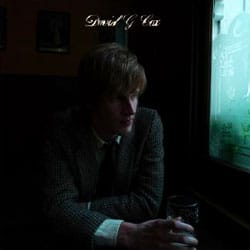 As a throaty, old-school voice weaves poetry and blues on opening track The Serpent’s Tale, confusion sets in. The photo of the young man, who looks like an Ivy League student, doesn’t quite correspond to a voice rich in life experience. David G Cox sounds way beyond his years, a troubadour of the new generation.

On his eponymous debut album, the young singer-songwriter comes across as Nick Cave‘s younger brother, conducting poetic episodes of his emotions and experiences in a gruff voice. Or he could be Frank Sinatra‘s singing poker buddy. But Cox is something in between – and more. His roots go deeper, way down South with one foot in a bygone era. Folk, blues and country combine into a unique blend that only far more experienced bluesmen could carry off, while world-weary lyrics showcase his emotional maturity. And you do need that to effectively dabble with blues.

The young Cox, once a member of garage rock bands Fever High Rollers and The Solution, not only looks like a student but he is one, pursuing a PhD in black American folklore and gospel. And his music definitely reflects his studies. The harmonica wails on Please Don’t Cry and The Ballad Of The Yellow Moon delves into folk. Some tracks linger on, like soft footsteps in the muddy banks of the Mississippi, while Forever And A Day is brief, makes its point and leaves.

Touches of gospel are peppered discreetly throughout, hidden beneath bluegrass. She Moves Through The Blue is deeply ingrained in the South, as is the semi-tragic When The Blue Sky Turned Red: “Put down that rusted blade that’s dragging on your skin/And look at all the mess you made because of all my sins.” Cox provides Novocaine for the hurt soul. But the most soothing elements are the vocals.

The three-part harmonies add multitudes of layers, without which the songs would be too stripped, but he’s also aided admirably by two accomplices. Classical singer Lucy Wolford, who conjures airy angels and the sweetness of a young Jane Birkin. Her accompanying vocals play an integral part in the structures, lending them as much character as Cox’s music and lyrics. Chad Mason is the other male voice, but his falsetto never overtakes master Cox.

The album closes with the uplifting House Of Cards, where each of Cox’s influences is showcased, from blues to country and folk. And with all that, Cox is going places. He’s made a worthy debut of astonishing calibre. If his blues get muddy and splatter us with dirt on the next album, he could take his place beside the greats.