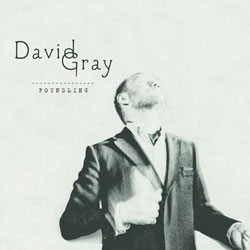 David Gray is on a bit of a creative roll. Less than a year after Draw The Line, he’s back again with an album hailed by the man himself as the best of his career and described, ominously, as his bleakest record yet. Which, from a man who once recorded a song from the viewpoint of somebody bleeding to death, is quite a promise.

We’ve been here before, of course. Draw The Line was described as the sound of the Cheshire-born singer-songwriter “kicking the doors in” when in reality it was more the sound of Gray quietly letting himself in, making a nice cup of tea, and then strumming away on his guitar for an hour. Like on every single one of his previous albums.

It’s true though that Foundling is even more low-key than before. Indeed, at some worrying points, Gray sounds like he’s on the point of expiring, so croaky and listless is his voice. It undoubtably suits the tempo of the songs on display here, but it does become slighty wearisome after a while.

The arrangements too are frail, at best. Forgetting, probably the most effective track here, features just a tinkling piano and Gray’s almost impossibly mournful voice, seemingly attempting to rhyme as many words as possible with the title, and then just repeating “forgetting, forgetting, forgetting” over and over again. As strange as it sounds, it’s weirdly affecting.

Mostly though, it’s tasteful acoustic guitars and mid-tempo balladry all the way, as laid down by the Babylon template all those years ago. It almost comes as something as a shock when Gossamer Thread appears to pick up pace, but it soon settles back down. Other moments of departure really don’t work, such as the saxophone break on the turgid We Could Fall In Love Again Tonight.

Lyrically, Gray seems to swing between the banal and the bleak. There are plenty of tracks here wistfully remembering a past lover, such as When I Was In Your Heart, the aforementioned We Could Fall In Love Again Tonight, and by the time he’s pleading “take me down, take me down” on the closing Davy Jones’ Locker, you’re beginning to fear for the poor man’s well being.

There’s also a tribute to Bryan Glancy, the late Mancunian singer/songwriter who also inspired Elbow‘s album The Seldom Seen Kid. Sadly, In God’s Name has none of that power, instead being a fairly standard and predictable maudlin ballad. The Old Chair, meanwhile, sees a huge string section being brought into play – the actual song is no radical departure, but it’s nice to hear something a bit more substantial on the album.

Ultimately, it’s a bit superflous complaining about a lack of anything new from David Gray – you’re not going to buy any album of his expecting a brave venture into dubstep, for example. He does what he does very well, and fans will buy Foundling in droves. For anyone else though, this is pretty hard going, with the lightness of touch displayed by tracks of yesteryear like This Year’s Love sadly nowhere to be seen.