by Ben Hogwood
published: 14 May 2021 in Album Reviews
Tweet 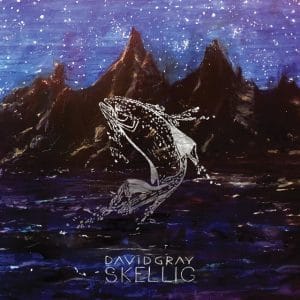 He may be 12 albums into his solo career, but David Gray continues to find ways of challenging and stimulating his art. After changing his equipment for the electronic workings of 2019’s Gold In A Brass Age, Skellig finds him heading in a westerly direction, stripping his songwriting to the bare bones.

The album is named after a group of exposed islands located off Co. Kerry, on the westernmost part of Ireland. The rocks are completely at the mercy of the Atlantic, but are an important sanctuary for birdlife and, in 600AD, provided a site for a group of monks looking to get as close to God as humanly possible. The story of their pilgrimage had a profound impact on Gray, and it acts as a stimulus for the 13 songs on this windswept album.

Although not a fully-fledged concept work, Skellig has its own ordered way of life. Reducing his music to basic elements, Gray pares back the vocals and surrounding textures to achieve his own sense of isolation. Even the volume is lowered, the ear drawn into the initially subdued music. Yet just as silence can become louder in the company of intense solitude, so this music becomes ever more dynamic, revealing its inner resilience in a way the monks would have surely appreciated.

Heart And Soul is one of the most telling songs, finding Gray with “wonder shining in my eyes like I’m three years old”, finding a higher place “where truth ain’t resented, where love ain’t despised…misrepresented and sanitised”. The mind’s eye pictures him on the rocky island, with only the music for company. On the title track itself, a distinctive melodic refrain swells as regularly as the waves hitting the shore below. Yet the lyrics tell of a different type of wave: “When a lie starts dancing, oh boy it sure can run, be halfway round the world before the truth can get its trousers on.” This commentary on social media couldn’t be further from the communication methods of 600AD, when direct messages were delivered in person, and it appears to represent a desire on Gray’s part to get nearer to that way of living.

Sparse it may be, but there are moments of beauty in Gray’s writing, which like the sea is never quite still. The deep textures of the lower strings on Laughing Gas complement stately piano and vocal harmonies, while the inflections of the guitar line on Accumulates paint the wide-open panorama of the islands. Their connection with nature is a theme running throughout, especially the open expanse to the west, where the next landfall would be Newfoundland, more than 2,000 miles away.

Although the recording of Skellig was largely completed before the pandemic, its messages of isolation, the need to escape rolling news and the merciless onset of technology are sharply incisive for now and the afterwards to come. The close intimacy reflects the living conditions most of us have experienced in the last 15 months, and it’s more intense than at any point in Gray’s career.

With these things in mind, Skellig is a searching piece of work. Beautifully constructed, it is at times uncomfortably sparse and weather-beaten, but its resilient head remains unbowed at the end. As an image of humanity through and after the pandemic it comes into clear focus, providing solace for those who need it too.