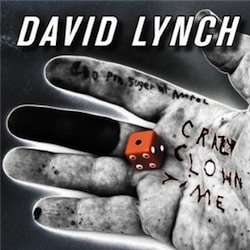 “I know a song. I know a song to sing on this dark night,” whispers a spooky, spectral David Lynch on Noah’s Arc, a quietly smoldering, beat-driven fever dream tucked away in the midst of Crazy Clown Time. And that’s really how auteur film director Lynch’s first album comes across; it’s a hellish, claustrophobic night terror, plodding a somnambulant path of destruction through the listener’s fragile psyche. A song for a dark night, indeed, and beneath all the telltale Lynchian weirdness (and perhaps, at turns, because of it), Crazy Clown Time is something of an off-kilter, haunted pop gem.

David Lynch is best known for films like Eraserhead, Blue Velvet and Mulholland Drive, as well as the cult favourite short-lived television series Twin Peaks, all of which channel the director’s distinct vision in their own way. What one takes away from Lynch’s body of work, though, varies by viewer; it’s as if the director intends to present the audience with ambiguity intentionally and with the purpose that each viewer draws his or her own conclusions, calls up individual emotional and psychological responses.

This approach often makes for unsettling films with a lingering effect on the viewer, and it’s this same singular approach that saves Crazy Clown Time from the danger of being a mere campy one-off from an eccentric would-be musician. The album itself runs for a sprawling 70 minutes, but its effects can be felt long into the dark night after everyone else in the neighbourhood as shut out the lights and it’s just you and the shadows creeping across the red curtains. And like any of Lynch’s films, it’s a difficult butterfly to pin to the wall; it’s been called “techno,” but that’s certainly not right, and it’s got blues leanings and follows pop formulas to an extent, but those classifications aren’t quite right either.

At the centre of it all is Lynch’s rumbling, tremolo-heavy blues guitar playing – all jarring chords and swampy sonic caterwauling – and his shaky voice sing-talking lyrics that are at turns nonsensical streams of consciousness and heartrending portraits of sadness and longing. Lynch’s voice has received a fair amount of criticism, but it’s a fitting narration to the album; his paranoid, nasal delivery feels at times like the mutterings of a madman. At best it calls up comparisons to Neil Young and Wayne Coyne; at worst it’s unsettling, discomforting, and downright menacing, especially when taken along with the lyrics (in the darkly brooding track, Football Game, for instance, Lynch threatens: “I saw you with another man. You better run, baby. I hope you can.”).

The opening track Pinky’s Dream sets the tone, and features the album’s one guest vocal spot by Karen O, sounding right at home in Lynch’s demented circus. Sounding at once bounding and constrained, haunted yet jubilant, this is a fair microcosm of the whole album. Good Day Today features Lynch’s vocals heavily filtered (“Send me an angel. Save me.”) over a driving dance-floor beat. Similarly, Strange And Unproductive Thinking invariably calls up comparisons to Radiohead‘s Fitter Happier with its computerised recitations about the importance of dental hygiene, “a reversal of sorts to the age-old phrase, ‘You can’t get something for nothing'” and the “possibility of the breaking of relationships based on the negative distortions of the mouth”.

Football Game is a guitar-driven, swampy track over which Lynch takes on the role of possessed bluesman, castoff ex-lover hell-bent on revenge and alone with his vices. The title track bears a similar markings, fading in tape-reversed guitar moans and sounding like a Tom Waits track that was thrown away for being too off-centre. Speed Roadster is perhaps the album’s finest moment, blending the guitar sludge with electronic drums to spooky effect (Lynch again channeling the jilted lover: “I know you fucked Al. He’s supposed to be my pal.”).

Like any of Lynch’s films, Crazy Clown Time is sure to be divisive and heavily debated, as well it should be. Some listeners (Lynch fans and non-fans alike) will regard it as the album of the year; others will continue to insist that Lynch is an overrated, self-absorbed hack. He could be a genius or he could be a lunatic; either way, one of modern filmdom’s most debated and alluring figures has made an arresting album that successfully translates his visual surrealism to a new medium.