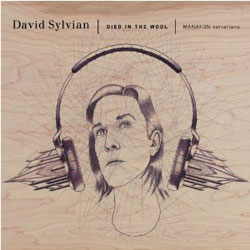 2009’s Manafon was perhaps David Sylvian‘s starkest, bleakest, most emotionally-challenging moment to date, in what had already been a long and distinguished post-Japan career. He told us, in a Q&A late last year, that these new interpretations of several pieces from that album – the fruits of a collaboration with composer Dai Fujikura – would both “flesh out the melodic content inherent in the vocal lines” and “make the compositions more accessible” by, in some sense, underpinning and highlighting the melodies that were always there in the original interpretations.

Re-workings of five Manafon tracks (Small Metal Gods, Random Acts of Senseless Violence, Snow White in Appalachia, Emily Dickinson and The Greatest Living Englishman) are included. There is also a version of an outtake from the original Manafon sessions (Anomaly At Taw Head (A Haunting)) and new pieces The Last Days of December, and Died In The Wool  – all three of which are Fujikura collaborations. Producers and electronics artists Jan Bang and Erik Honoré are the other significant contributors here, providing the remixes of Manafon and Emily Dickinson as well as two tracks of new material, in which the poet Dickinson’s works are set to music (I Should not Dare, A Certain Slant Of Light).

For anyone familiar with the sparse originals, where the silences seemed heavy with every bit as much significance as the improvised sounds between them, Fujikura’s often quite lush instrumentation will initially come as something of a shock. Small Metal Gods, in its new setting, sounds frequently dramatic, sometimes even playful with the strings full and rich or pizzicato. The line “Where’s my Queen of Hearts” now sounds more conventionally “romantic” and the shock of the suicide reference is somehow lessened. Here also, the Random Acts of Senseless Violence, so persuasively described, are over-emphasised, rather than played down. Placing these tracks (these words and vocal melodies) in such different settings seems to brings a different emphasis to them, forcing a re-evaluation by the listener.

Sylvian’s ever-striking vocal combines beautifully, on occasion, with the arrangements. On I Should Not Dare and A Certain Slant Of Light, in particular, there is depth, humanity and a curiously old-fashioned kind of glamour to the singing, all framed in the warm accompaniment of strummed acoustic guitars, piano and little flecks of brass. Sylvian himself claims of this album: “I don’t think I’ve produced work of a more intensely emotional nature than that of the past eight years or so”, and the emotion indeed can be clearly felt.

A second disk provides the first stereo CD version of Sylvian’s audio installation When We Return You Won’t Recognise Us, produced in 2008 for the Biennial of Canaries. Inspired by the genetics and lineage of the descendents of the original Spanish settlers in the Canary Islands, this improvised work features John Butcher, Arve Henriksen, Günter Müller, Toshimaru Nakamura and Eddie Prévost and a string sextet directed by Fujikura. The resulting 18 minute piece feels very much “of a part” with the preceding album, seemingly created in a similar spirit and resulting in a thoughtful longer but comparably instrumented and atmospheric piece of work.