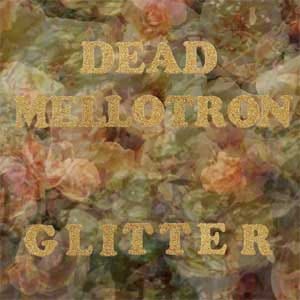 Dead Mellotron’s John Frazier, Baltimore by way of Louisiana, appears to be the straightforward type: his particular persuasion of uncomplicated shoegaze has taken root and bloomed with the addition of bandmates Courtney Corcoran and Aimee Bowen.

Having cut their teeth with two self-released albums to date – Ghost Light Constellation and self-titled – Dead Mellotron now find themselves at a crossroads: to plough the lone furrow and fight the good fight, or dial back the reverb dilute to taste.

Glitter, as it happens, plunders from column B by sticking to column A. It is an album (and just barely an album at seven tracks and 25 minutes) that doles out its genre’s finest elements in generous fistfuls and soars accordingly, its creators’ simple, unassuming method intact. Indeed, their lack of pretence is evident in the titles alone: Stranger, Can’t See, Bye, Making Up, Babe, Oohahh, Dying.

So, what – there’s no angle? No gimmick? No USP? How good can an album possibly be when its progenitors adhere with unflinching directness to a blueprint set down as long ago as the late 1980s?

Astonishingly good, actually, because Glitter is that rarest of creatures – the long player worth far more than the sum of its effortless parts – and tenders no sleight of hand to achieve it. From opener Stranger – a buzz-generating, Beach House-like jack-of-all-trades built on the premise of a relentlessly simple riff, sudden crescendo and pensive comedown – to the closing strains of crushingly overdriven closer Dying, Glitter occupies its aural space with stunning effectiveness.

Between its bookends, the album showcases Dead Mellotron’s adroitness. As early as track two, Can’t See, the trio operate at whisper-quiet levels for the briefest of passages – a languid intro draped over bare percussion, sauntering bass and delicately-strummed falsetto chords – before crashing into glorious abandon. Were Frazier’s vocals not sunk so low into the mix (to the point of indecipherability), it could be a sister track to any found on Deer Hunter‘s Halcyon Digest.

Bye then picks up its predecessor’s thread in a very literal sense, corralling its white noise outro gently at first – with tactile, lingering synth notes – and then more forcefully shaping its direction with a striking beat. Its bare piano coda, too, is something to behold.

At Glitter’s halfway point the signals are coming thick and fast that Dead Mellotron are something special. Making Up again evokes an unintelligible Bradford Cox, and ultimately, when it eventually – and patiently – finds its alt-rock feet, sounds like an unlikely pairing of The Longcut and Darwin Deez (sans the latter’s witty lyricism).

Babe paints a bright streak across the canvas – its two-and-a-half-minute existence spent carefree with rattling high-hat and leisurely reverb – and Oohahh alternates between long-lived strums and searing, eye-watering overdrive; two contrasting constituents of an LP that doesn’t need to stray from its chosen artform to mesmerise.

Dead Mellotron will never be a household name – and neither, we suspect, do they want to be – but in Glitter they have produced an affecting, arresting genre masterpiece worth repeat spin after repeat spin. One of the albums of the year, without a doubt.