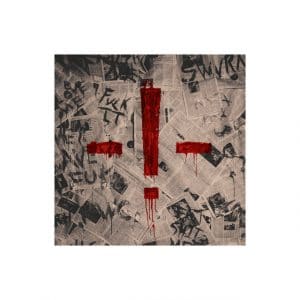 Somewhere between groove-rock and genre-bending pop, Dead Poet Society embarked on their debut album -!- with the spoken word. It soon becomes clear that the argument to this exclamatory album is that the quartet wants to subvert opinion, “do what feels good to them”, and march to the sound of their own drum. Although Dead Poet Society definitely swerve between genres, tracking the woeful story of a toxic relationship, underneath the often glam rock arrangements is a keen sense that this Boston band do actually want to impress. Perhaps a little too hard.

The formatting of the track titles can come across as pretentious, and there are other mis-steps too. Track 13 -gopi- is a recording of an almost critical woman giving  “not not” negative feedback, which distracts from the message, if staged, and distracts from the music, if not. .SALT. attempts to be a grimier cross between The Smashing Pumpkins and Nine Inch Nails which, although not uninteresting, doesn’t add much to the overall feel of the album.

But there are some strong highlights that show Dead Poet Society’s potential. In Too Deep speaks to the confusing rush of struggling to find answers when everyone else you know seems to be taking a path more travelled. This charged track is both lyrically emotive and sonically shows the quartet at a chaotic crossroads with heavy guitar riffs and a subtle undertone that carries it. In Too Deep seems to encapsulate the perfect combination of carelessness and sharp production that the band were aiming for, with a crackling energy that clearly shows why this track was a single.

.getawayfortheweekend. has a similar electric feel, having a Catfish And The Bottlemen meets The White Stripes nostalgia that really brings some pop-punk magic to the album, with Jack Underkrofler’s vocals both growling and jumping octaves, and a breakdown that is in contrast to the playful, hardcore sound of the chorus. From this it is clear that Dead Poet Society want to push boundaries with their work, and in this track at least, they seem to have got the balance right without drifting off into the metaphorical music sea. Other tracks like American Blood, I Never Loved Myself Like I Love You and .loveyoulikethat. are equally striking, even if they don’t seem to quite reach the benchmark that the quartet builds elsewhere.

Dead Poet Society seem to skip and start between genres, and it can play as confused, rather than experimental. I Never Love Myself Like I Love You is a Two Door Cinema Club-esque ballad which wouldn’t feel out of place as the last dance at a party after too much weak beer whilst .loveyoulikethat. is oily, albeit effusive, Southern Rock that has potential with Underkrofler’s vocals, but falls flat in instrumental.

It’s not that the tracks themselves don’t work – most of the tracks on their own have their own interesting elements – but rather that as a collection of songs there seems to be a lack of cohesion. However, Dead Poet Society show a lot of promise, with talent that shines through even in the weaker areas. Although this is a rather unsubtle debut, it marks the band as one to watch.