The Dead Weather – Dodge And Burn 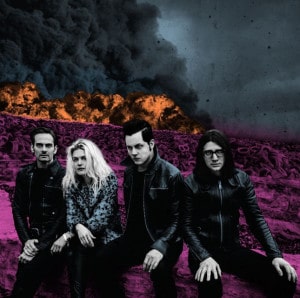 When he is not preoccupied with (allegedly) trying to start a fight with one half of The Black Keys, Jack White is usually busy making music. The former frontman of The White Stripes has spent most of his time since the duo officially disbanded making two solo records, but this hasn’t stopped him from working on the third effort from supergroup The Dead Weather, formed with The Kills’ Alison Mosshart in 2009.

It has been five years since the Nashville band – which also features Dean Fertita of Queens Of The Stone Age and Jack Lawrence from White’s other outfit The Raconteurs – released their second record, Sea Of Cowards. Work to create its follow-up had actually begun in 2013, but the different members’ busy schedules only allowed them to record sporadically.

Initially, the four-piece had decided to release new material in batches of two, but that idea was shelved and The Dead Weather’s third LP, Dodge And Burn, is now the end result of what has been a long, drawn-out process. If this sounds like the background to an album that could reasonably be expected to sound fragmented, it’s a testament to White and co that it is anything but.

The record kicks off with recent single I Feel Love (Every Million Miles), which is the perfect re-introduction to the world of The Dead Weather, Mosshart’s signature strangled vocal surrounded by scuzzy guitars and some furious drumming from White. It is a song that is very typical of The Dead Weather, and that’s by no means a bad thing; there is absolutely no fat to chew on, it’s simply a brutal burst of lean garage rock.

This is quickly followed by the equally abrasive Buzzkill(er) – one of four previously released tracks from the album – which features a stinging guitar riff and more thunderous drumming from White. “Oh Lord, forget about me/let me ride,” Mosshart sings, before the chorus explodes into life. Let Me Through attempts to maintain this early momentum with its crunching, White Stripes-esque riff, but ends up sounding a bit stodgy.

The brief lull towards the album’s middle section, compounded by the strange pacing of the White-led grunge track Three Dollar Hat, is soon addressed by Rough Detective. White joins Mosshart on vocals for the track, the pair trading lines over a repetitive drum beat and stop-start guitars. Then there’s Open Up and the hook that arguably packs the most telling punch on the record, complementing Mosshart’s vocal perfectly.

However, as Dodge And Burn moves into its final third, it is hard to get away from the fact that it’s all a bit repetitive, and certainly lacking a left-field moment of madness like I Cut Like A Buffalo from 2009 début Horehound. Mile Markers provides something a bit different to what’s gone before, thanks to its shuffling drum beat and Mosshart’s quicker delivery, but it is sandwiched between Be Still and Cop And Go, which sound very much like The Dead Weather on cruise control.

Yet just when it has all become a bit too predictable, they come up with the surprising and completely out-of character closer, Impossible Winner. Following the no-nonsense brute Too Bad, it sees Mosshart show the full range of her vocals over prominent piano chords. As comebacks go, Dodge And Burn is a solid effort and possibly The Dead Weather’s most cohesive record to date. It’s just a shame that the band leave it so late in the day to delve into their box of tricks.