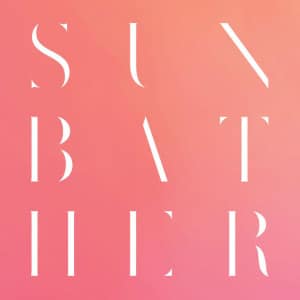 The albums that creep up and surprise – no, startle – you are always the most satisfying. Deafheaven‘s Sunbather is, without doubt, this year’s example.

It’s fair to say that black metal doesn’t usually catch the consciousness of the wider music community. Yet the way Deafheaven fuse it along with post-rock and shoegaze meant that Sunbather was always likely to do quite well. Indeed, their 2011 debut Roads To Judah was acclaimed for pushing the boundaries of black metal away from its now entrenched Norwegian foundations – foundations that have something of an image problem to say the least. Not that they’d be concerned with that, obviously.

For some, Sunbather might well be their first experience of Deafheaven. And, like any album that surprises, word of mouth gets around. Yet despite all that, nothing prepares you for the truly immense and orchestrated power each song – or should that be each piece? Four of the album’s seven tracks are over nine minutes long – possesses.

And yet it is meticulous, orchestrated and, dare one say it, beautiful. Kerry McCoy’s guitar takes on multiple guises that reveal themselves after multiple listens. The interlude at around the five minute mark takes it into calming, post-rock territory but brings some respite for the listener. The final three minutes are more sedate but still forceful; the drums are toned down, but Clarke’s voice is arguably more powerful here and McCoy’s guitar work achieves a greater emotional potency. It is exhausting. But so rewarding.

There’s a sense Deafheaven know how exhausting their music can be. Following track Irresistible is, actually, rather gentle; guitar and piano work delicately together side-by-side and it achieves something akin to Mogwai’s Les Revenants soundtrack from earlier this year. However, this only makes title track Sunbather more surprising, which picks up where Dream House left off for 10 unrelenting minutes.

Please Remember initially takes a post-rock leap – the samples and swirling guitar reminiscent of Godspeed You! Black Emperor – before descending into My Bloody Valentine You Made Me Realise levels of noise. By the end, all we’re left with is acoustic guitar played alongside what sounds like slide guitar. You’re truly put through the mill.

That’s especially so during Vertigo, which lasts almost a quarter of an hour. A rather sedate opening few minutes eventually builds as McCoy’s guitar gets heavier and the drums take control, before Clarke enters and a 10 minute assault begins. The sustained level of Clarke’s vocal is extraordinary. You can sense the pain that must surely be there in his throat, somewhere, burning away. Torturous sounding.

By the time the 11 and a half minute The Pecan Tree arrives, it’s almost too much to bear. But the composition is just right; the sustained pressure inflicted on the listener is brought down when it threatens to become too much, as the interlude halfway through brings together piano and slide-sounding guitar again, before taking it back up again for a couple of minutes only to gently fade out.

Sunbather is an emotionally overwhelming but truly absorbing listen. But best of all, it’s cleansing. By the end, you feel drained but also at ease, a calmness bestowed upon you. There’s something deeply relevant about Sunbather, as if it touches a sort of inner anxiety and insecurity that currently lingers in many of us. Perhaps that’s why you feel so calm by the end of it. It’s been fed and, for the time being, it relents. As if Deafheaven put themselves on the line for us. Sunbather deserves every accolade it’s likely to get.