Death Cab For Cutie – Thank You For Today 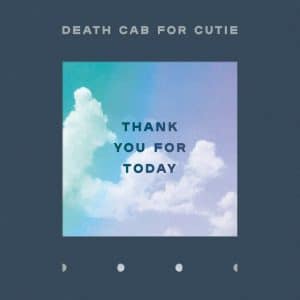 There’s a comforting familiarity about Death Cab For Cutie which means that part of you is always transported back to the early 2000s when you listen to them. It could be the fact that they’re so associated with one of the most popular TV shows of that time, The OC, or that one of Ben Gibbard’s most iconic songs, Such Great Heights (recorded by his offshoot band The Postal Service) was released around that time. But they seem to be proof that no matter what changes, some things stay the same.

A lot has changed in Gibbard’s life in the 20 years since Death Cab’s debut album Something About Aeroplanes was released. He’s been married twice (once to Hollywood star Zooey Deschanel), and four years ago his long-term collaborator Chris Walla left the band. Thank You For Today is the first album with no contribution from Walla (2015’s Kintsugi was released after his departure but featured his creative input) but anyone expecting a radical change of direction is likely to be disappointed.

For Thank You For Today is very much the quintessential Death Cab For Cutie album – wistful, sad, hopeful with Gibbard’s unmistakably plaintive vocals to the fore. There are songs about lost love, the gentrification of local communities and trying to grow old with dignity, and the whole 38 minutes of the album feel very much like sinking into a warm bath.

Opener I Dreamt We Spoke Again sums up the melancholy atmosphere that pervades most of the album, telling of Gibbard being haunted by a long departed ex – “it’s been so long since we spoke that your voice was like a ghost in my head”. There’s a bit more muscle to Gold Rush (built around a sample of a Yoko Ono song), but the bittersweet feelings still remain as Gibbard rails against the newcomers “digging for gold in my neighbourhood…all I see is a long goodbye, a requiem for a skyline”.

There’s a lovely Sufjan Stevens-style lilt to Your Hurricane, but one of the highlights is the furious, propelling drive to Northern Lights, which features the guest vocals of Lauren Mayberry from Chvrches. It’s reminiscent of Gibbard’s work with The Postal Service, and his lyrics take on a poetic edge that produces some great imagery (“we shared a clove cigarette on the parapet, as the TVs glowed from the windows of the model home”).

If there’s a flaw with Thank You For Today, it’s in its inherent predictability. After 20 years, there are no big surprises to be found in a Death Cab For Cutie album, and there’s not really much on this latest release that comes close to their peak era of Transatlanticism or Plans. Much of it is lovely to listen to, but may not end up on an ‘essential Death Cab For Cutie’ playlist.

The exceptions come towards the end of the album – You Moved Away is a quietly devastating tale of someone moving out of their city and leaving “an empty space” where their presence used to be, and the closing 60 & Punk, a disappointed look at a former idol – a “superhero growing bored with no one to save anymore” – who’s descended into alcoholism and living off past glories.

As the chorus to the aforementioned Goldrush puts it – “please don’t change, be this way”. Death Cab For Cutie aren’t changing any time soon, and Thank You For Today is another reliable if unsurprising missive from a band who seem to be settling into middle age comfortably.