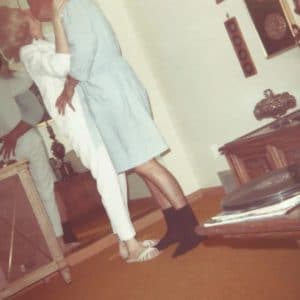 Dance-punk should have been long dead by now, but it keeps refusing to perish. Who’d have thought that right now, in 2021, that one of the longest-lived, most-enjoyed rock bands of the early 2000s vintage, Death From Above 1979, would return with a new album?

The fact that this new record, Is 4 Lovers, is their fourth album in 20 years is surprising enough, but when you factor in the band’s rocky history and tendency to take long gaps between album releases, it’s even more of a big deal for anyone out there who’ve been waiting with bated breath.

The good news is that the DFA 1979 formula – loud, aggressive waves of guitar feedback laid in sheets over an almost-progressive hardcore base – is here, and is still so unique and distinctive that at first listen they don’t appear to have lost a step. They also usually manage to sneak in a quiet, sedate number in the midst of the chaos, to help soften the blow, and this album is no different. In fact, there are so few differences between this record and any of the previous three that fans will feel as though they’ve just been dropped back into the old ways, as though this were business as usual.

The duo – Jesse F Keeler on bass, and Sebastien Grainger on drums and vocals – go through all the motions over the course of the record. From the dynamic control of Mean Streets, to the thick rawk grooves of NYC Power Elite, there’s lots of stuff here to enjoy with your feet. Love Letter is a sensitive, delightfully restrained number, while the spacious opener Modern Guy dips back into some well-worn psych-rock tropes (which they also lean into on Totally Wiped Out), while One + One goes back all the way to the twitchy, over-stimulated sound they’ve come to be known for.

Anyone coming to this album expecting something new will be sadly disappointed, and those hoping to find a better version of something they’ve heard before will be doubly let down. Despite this being their third decade as a group, you might be expecting them to have added some new dimensions to their sound, but for better or worse that hasn’t happened. If you take this for what it is, then you’ll have a great time, but the second you start to think about the longevity or replay value of this album, it all starts to come apart at the seams. This is a great album for the fans, but that’s essentially all it is.