by Chris White
published: 26 May 2020 in Album Reviews
Tweet 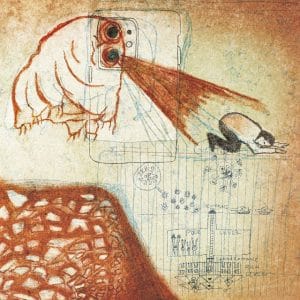 For a quarter of a century now, San Francisco’s Deerhoof have been one of the most consistently inventive, interesting bands on the US alternative scene. Blending garage rock rawness with the experimentalism and sugary melodies of vintage psychedelia, and featuring a highly distinctive vocalist in Satomi Matsuzaki, they are a group very much cut from the same cloth as their more heralded Californian Summer of Love predecessors of the late 1960s.

Deerhoof’s last album, 2017’s Mountain Moves, was one of their most polished and accessible, featuring a series of comparatively straightforward, power pop songs, recorded with a range of guests including Wye Oak‘s Jenn Wasner and Stereolab‘s Lætitia Sadier.

On Future Teenage Cave Artists, they’ve reverted back to their core line up, and dialled up the strangeness, to produce a restlessly energetic record that’s constantly shifting in mood and tempo, its tracks composed of many diverse fragments haphazardly patched together with little in the way of conventional structures. At first, as with much of the rest of Deerhoof output over the years, it can feel like a bit of a dauntingly impenetrable mess. Gradually though, through more prolonged immersion in their sonic world, it all starts to make some kind of beautiful sense. It’s never an easy listen, sure, but there’s method to the madness.

Future Teenage Cave Artists gets off to a winning start with the angular tunefulness of the title track, the ragged dual guitars of Ed Rodriguez and John Dieterich soon joined by Matsuzaki’s hypnotic, frequently indecipherable voice, which recalls Indian ragas with its freeform intertwining around the other musical elements present. Often serving as an additional instrument rather than playing any kind of narrative role, perhaps the nearest vocal comparison is to the Cocteau Twins’ Liz Fraser – certainly on songs like The Loved One – although Matsuzaki’s tone lacks the otherworldly loveliness of the angel-throated Scot.

Elsewhere, highlights include the warped playfulness of the wonderfully titled New Orphan Asylum for Spirited Deerchildren, with Matzuzaki chanting “you gotta be good, you gotta be good” over woozy guitar and what sounds like a glockenspiel, the chaotic Captain Beefheart-like rhythms of Zazeet and the dreamy, jazz-infused prettiness of Fraction Anthem.

The album closes with a startling performance of Johann Sebastian Bach’s 1732 church cantata I Call On Thee, with just Greg Saunier’s piano and slivers of faint ambient noise. Completely out of kilter with everything that’s gone before, it’s a serene ending to a record that has hitherto scarcely paused for breath, and the sudden, completely unexpected shift works wonderfully.