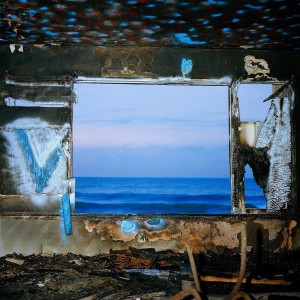 When Deerhunter released their second album, Cryptograms, back in 2007, they didn’t sound like a band built for longevity. A coruscating blend of shoegaze, ambient and krautrock, the album sounded constantly on the brink of collapse; any melody that emerged from the sonic sludge was swiftly snuffed out.

But then came the follow-up, 2008’s Microcastle, which represented a quality leap comparable to that carried off by Radiohead between Pablo Honey and The Bends, or by Nirvana between Bleach and Nevermind. This was a superb record that found experimentation and melody in near-perfect balance. Legions of music fans were, rightly, smitten. Two more excellent albums – 2010’s Halcyon Digest and 2013’s Monomania – followed and, consequently, there’s sizeable expectation surrounding the release of the band’s latest full-length, Fading Frontier.

Monomania was an odd album: billed in advance of its release as an ‘avant garde’ record, the album’s central streak of songs were actually the poppiest and most straightforward numbers the band had committed to tape. But the production was wilfully, almost contrarily lo-fi, with pretty much every sound buried beneath layers of distortion.

On Fading Frontier, Monomania’s sonic crud has been cleared by producer Ben H Allen (Animal Collective, Belle and Sebastian) and what’s revealed is a fantastic sounding record. The vocals ring clear and true, the guitars sparkle and the keyboards (which feature more prominently than on any previous Deerhunter album) are buffed up to a bright sheen.

The brightness of production is, largely, matched by the lyrical content. Last year, Deerhunter’s main songwriter – the garrulous, provocative Bradford Cox – was laid low after being hit by a car. Cox claims to have lifted himself out of a depressive spell that followed the accident and now speaks contentedly of his settled home life.

Accordingly, Fading Frontier’s first three tracks can be read as a triptych of hard-earned happiness. Opener All The Same is a defiant call to arms (“Take your handicaps / channel them and feed them back / until they become your strengths”); the power chords that lead to the chorus feel like a series of air punches. It’s followed by Living My Life, a beatific paean to domesticity whose undulating bassline and twinkling keyboards radiate warmth and contentment. The third track, Breaker, is more upbeat still: the chorus (one of the year’s best) hits like a serotonin surge.

Breaker is also notable for marking the first occasion when Bradford Cox and guitarist Lockett Pundt have shared vocals on a track. Pundt has long been Colin Moulding to Cox’s Andy Partridge: like the XTC bassist, Pundt isn’t the band’s main songwriter, but he has contributed a disproportionately high number of the band’s most cherished songs (Agoraphobia, Desire Lines, The Missing). His sole credit on Fading Frontier is Ad Astra, a glimmering piece of Gary Numan-esque synth pop.

Fading Frontier features two notable guest appearances. Stereolab’s Tim Gane plays electronic harpsichord on Duplex Planet (the second time Cox has collaborated with a member of the ‘Lab, having duetted with Laetitia Sadier with his side-project Atlas Sound), while Broadcast’s James Cargill adds disquieting tape loops and atonal piano stabs to Leather And Wood. The latter track marks the only occasion when Fading Frontier’s upbeat, optimistic atmosphere is broken. Cox begins a series of declarations with the words “I believe…” but his quivering tone of voice suggests otherwise.

Leather And Wood’s uncertainty proves short-lived, however. It’s followed by the uncharacteristically funky Snakeskin, the above-mentioned Ad Astra and Carrion’s closing roar of defiance. These three tracks provide a punchy conclusion to what is unquestionably Deerhunter’s most approachable album to date.

Fading Frontier is, however, not the band’s best work. There’s not a single track here that’s remotely poor or even mediocre but, at the same time, nothing here packs quite the same emotional punch as, say, Helicopter off Halcyon Digest or Microcastle’s Neither Of Us, Uncertainly. Similarly, there isn’t a track to rival the visceral thrill of 2008’s Nothing Ever Happened or Monomania’s Back To The Middle.

It all means that Fading Frontier is probably Deerhunter’s fourth best album. It’s still an excellent record, but it’s just ever so slightly underwhelming.