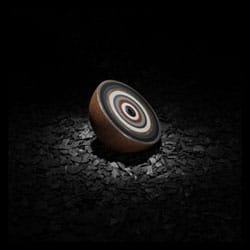 The UK rap scene is getting quite cluttered right now and to stand out requires either sheer brilliance, some serious individuality or both. Dels, the latest protégé from famed UK rap label Big Dada, seems to have gone for both. The trouble is, in trying to make himself standout as an individual, he may have gone too far on his album GOB and scared off any potential mainstream listeners with his far-out style.

In terms of his technical rap ability, Dels has the talent to match the likes of Tinie Tempah, Chipmunk and Tinchy Stryder. He is whimsical with his wordplay, although at times he can get very grim (never more so than on the track Droogs) and he is also blessed with a voice that was seemingly made to rap.

The beats for the best part of this album are terrific too, with that computer/arcade game-ish sound similar to what Tinie Tempah and Labrinth have been creating; sharp electronic keys cutting through a heavy bass line.

His lyrics are real, in the sense that he speaks about living an everyday life, from coming into work with a hangover to breaking up with his girlfriend. Dels is also self-deprecating to the point of being comical: “After work drinks got me walking kinda slow, like a polar bear walking through the snow” (on the excellent Moonshining, a song about being drunk that is nearly as amusing as actually being drunk). This is as far removed as you can get from the usual style of today’s rappers that brag so much about their swagger they talk like they could walk on water.

Any strangeness on an intro track can always be forgiven as an intro track is hardly ever an actual track, rather an introduction to the artist and/or the album. So when the opening track Hydronenburg goes from a nod-along, up-tempo, rap tune filled with crazy lyrics (“I am the architect of my thought, where unicorns shit glitter. Welcome on board.”) that shift into something like a spoken-word poem about the hardships of working in a deadend job, it is easy to forgive Dels.

But it happens again on Trumpalump, which is a shame because it starts off sounding like a real banger but somehow descends into sounding like Coldplay‘s latest. It is not in just these two songs either; it happens again on Moonshining and then again on Violina. In an attempt to perhaps stretch out the meaning and emotion of these tunes, Dels actually takes away from the head-banging impact they genuinely have.

Even more worrying though, is Dels’ aversion to choruses. Yes, the good old sing-a-long bit of a tune, the part of a song that can either make or break it, is simply missing on most of the tracks on this album. If this was an artistic decision from Dels, Big Dada really should have stepped in to save him from himself.

It is hard not to be disappointed with this because Dels is a supremely talented rapper and the beats (the first part of them anyway) are made to be blasted loudly. This is not to say the whole album is a disappointment; tunes like Shapeshifter and Capsize (featuring legendary UK rapper Roots Manuva) are UK hip hop at its best. Unfortunately for Dels though, GOB is probably not his ticket out of deadend jobs forever.