Delta Spirit – History From Below 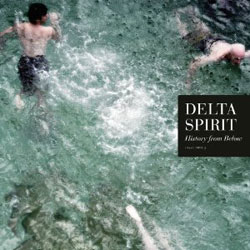 One guitarist down since the release of their 2008 debut Ode To Sunshine they may be, but San Diego’s Delta Spirit have retained an instinctive sense of rhythm and drive that makes everything they produce infectious on the ear. This makes perfect sense: four of their five members used to play drums for other bands. Stick-holder Brandon Young can tap on some trashcans a couple of times and the rest will follow suit.

Trashcans? Well, yes; Delta Spirit met in a squat, recorded their debut in a cabin and up until now, had been firmly loyal to a lo-fi, DIY sound. That’s all changed with their second record, History From Below. It’s a neat, concise collection of top-tapping, country-rooted blues rock, staying true to its predecessor but branching out with some real success. When amplified, Delta Spirit can sound closer to American indie contemporaries The Soft Pack and, during the more sombre Ransom Man, they’re found likening Irish wordsmith Fionn Regan‘s latest attempt to create songs that mimic a brawl in a country bar.

But they’re kept thoroughly identifiable through the eye-opening, follow-the-leader performance of frontman Matt Vasquez. He displays versatility, spanning through the hard-hitting opener 911; the wise, winsome Devil Knows You’re Dead; the epic warmth of closer Ballad Of Vitaly; managing to hold it together the whole time. Vasquez is something between a triumphant Brandon Flowers and a more rockabilly Michael Stipe, and he’s just as important as either of the aforementioned are to their respective bands.

“May the wind be always on your back, and the sunshine soft upon your face” he declares in Devil Knows You’re Dead, sounding more akin to a guide book for those traveling in a camper van than a rock singer discovered playing guitar in an area of San Diego frequented by the homeless. His unnerving grip on an unarguably note-perfect but far from original band performance is paramount in making History From Below several firm steps beyond its older sibling.

It’s a similar pattern of events to that of the band’s debut. But where previously Vasquez and co were left obtaining comparisons to the likes of Cold War Kids and Tom Waits – probably to their frustration – on Ode To Sunshine, a new era is begun, with the group’s frontman helping to carve an almighty, original sound.

Several things still need to be achieved: they’re yet to write a coherent record (although the theme of love is one that’s found time and time again on this album), an iconic song, a defining moment in their career. In other words, they’ve yet to reach their peak. If they stay true to their rhythm, their swagger and their charm, they’ll continue building a solid foundation from which to create something truly special.