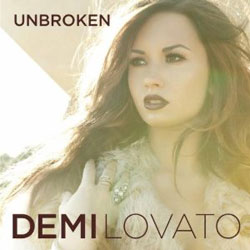 Demi Lovato has always been something of a dark horse when it comes to the Disney stars, never quite making the transition to the UK charts with the carefully managed ease of her contemporaries. With the days of duets with the Jonas Brothers behind her, Lovato’s third LP positions itself as a coming-of-age effort, presenting her as glossy, grown-up and mature on its cover – but lasting impressions of its actual contents are mixed. For the Camp Rock songstress, Unbroken plays out as a real album of two halves – with its first side being lamentably poor.

Timbaland collaboration All Night Long opens affairs and sounds about five years out of date, slinging funky guitar riffs and the producer’s characteristic beats around like so much spare change. Who’s That Boy likewise aims for the same faux-urban sound, a tinny Justin Bieber-esque vibe that sees both Lovato and her voice becoming largely interchangeable.

The track even dares to include an overly cutesy, juvenile rap section – almost as if the song went through a pop-formula box-checking exercise. The only trouble? In the process they seem to have forgotten the most crucial element: a decent melody. The album hits a low on Iyaz-featuring You’re My Only Shorty; a physically cringe-inducing track so generic it becomes utterly faceless.

Even when the album finally abandons its tired R&B pretences on confident rock number Together, Jason Derulo is shoehorned in – it’s as if the album was felt too weak to stand on its own two feet. It’s a disappointing dragging-down of merit as Together is otherwise the first time the album really gleams with some sense of potential. Lovato should shine as a star in her own right, not over-burdened with trend-chasing guest star slots.

Unbroken’s title track then sees Lovato donning her party shoes, but it’s too little too late; like rocking up to the club only to find everyone already leaving. Again Lovato fails to inject the song with anything of herself, Unbroken could just as easily be a Ke$ha off-cut, and it feels all the weaker for it.

Hold Up is better – a fizzy Saturdays-styled jaunt, while Mistake recalls Rihanna‘s Take A Bow, piling on an arena-load of guitars in a truly triumphant middle-eight. It feels like a watershed moment within the record as a whole, culminating in the exceptionally brilliant Give Your Heart A Break. It’s these tracks that add that much needed weight to Unbroken, binning the trashy R&B incarnation for a rejuvenated femme-fatale in her prime. Here, Lovato becomes the true pop heroine; backed up by infinitely bigger, better choruses.

Likewise, Fix A Heart and Skyscraper achieve the maturity the album’s opening moments were crying out for – trembling, beautiful creations built on sweeping, rhapsodic interplays of piano chords and strings. ‘You must be a miracle worker…’ pleas Lovato in Fix A Heart to some imagined love interest, and taking Unbroken as a whole, it’s a prayer that’s half answered. If anything, the real miracle is that the record manages to salvage itself so deftly after the horribly disappointing opening.

Exorcised of the dud tracks, Unbroken is a streamlined pure-pop winner, but ultimately it cannot measure up to Lovato’s contemporaries. The darkly seductive electro appeal of Miley Cyrus‘ Can’t Be Tamed and the sheer effervescence of Selena Gomez‘ When The Sun Goes Down proved just how good the Disney stars could be when they wanted to – but placed alongside, Unbroken is only half-way there.