by John Murphy
published: 2 May 2013 in Album Reviews
Tweet 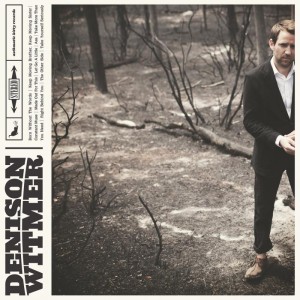 Judge a person by the company they keep, so the old saying goes. And in the case of Denison Witmer, it’s a decent adage to go by.

For, if you want to know what the typical Denison Witmer record would sound like, it’s a good starting point to look at the list of his collaborators over the last 15 years. He’s signed to long-term friend Sufjan Stevens‘ record label Asthmatic Kitty and worked with Rosie Thomas and fellow Pennsylvania native William Fitzsimmons. Put it this way, he won’t be performing guest vocals on a Rudimental song anytime soon.

Witmer’s self-titled ninth album is a continuation of his work so far – 11 tracks of thoughtful, poised pop-folk whose tempo never rises above a mild trot. The reflective nature can be explained by the personal circumstances behind the songs – the death of his father and the birth of his child – and there’s certainly a bittersweet air to much of the lyrics here.

Obviously for a release on Sufjan Stevens’ label, there’ll be the inevitable comparisons with the man himself. And while Witmer may not be as ambitious as his friend, there’s certainly a low-key charm reminiscent of Stevens’ earlier work. Opening track Born Without The Words is beautifully, subtly arranged like a track from Seven Swans – both a touching ode to his baby son and a nod to his own mortality (“I’ve grown too old to die young now”).

The lilting Keep Moving Brother, Keep Moving Sister continues the personal nature of Witmer’s lyrics (with a nagging refrain of “I’m determined to change”), although the most moving moment on the album comes on a cover version of Bryan Webb‘s ballad Asa – which, as that also happens to be the name of Witmer’s child, he makes it sound like he’s written it himself.

All this tasteful folkie pop probably won’t be to everyone’s taste though. It’s undeniable that, if you’re not in the right mood for it, much of this album will come across as quite dull and a bit cloying. The fact that all 11 tracks are pretty much of the same vein – lilting, wistful ballads sung in a tasteful and understated fashion – means that it’s probably best for background listening or in small doses. Yet there’s no denying the craftsmanship involved or in the beauty of Witmer’s voice, which sometimes recalls Paul Simon, or on the hushed Take Yourself Seriously, Elliott Smith.

Apparently, this self-titled album was inspired by an epiphany that Witmer experienced while at the Van Gogh Museum in Amsterdam a couple of years ago. This record probably won’t change the world in the manner that Van Gogh’s art did, but fans of quiet, unfussy acoustic music will find much to enjoy.