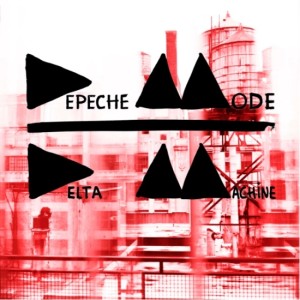 When Depeche Mode released their 2009 effort Sounds Of The Universe, the general consensus was ‘another job well done’. In classically efficient manner, the record fulfilled expectations, played all the band’s traditional sonic calling cards, and provided an ample smattering of new material to pin a new tour on. But new album Delta Machine is about more than simple fulfillment – going one further to actively excite, as it lays the template for some of the band’s most vigorous, energetic material in 15 years.

Early highlight Angel – uploaded to YouTube late last year as a taster track – stands as a riotous, breakneck electro-blues workout, dripping sleaze and sweat from every pore – easily the rival of any of the uptempo numbers from Playing The Angel. Along with the moody, expansive album opener, the song sees the band all at once both clinical and terrifically dirty; one second a disarming smile, the next a flash of bared fangs.

With such immediate, instant paragons of quality on the record, lead single Heaven was always going to be a more considered choice for the band to front the record with. Its status as a brooding slow-burner is assured though; Dave Gahan and Martin Gore harmonising with characteristic ease; the fuzzy thrum of Gore’s guitar in the choruses underpinning a melody that is all at once mournful and on the cusp of ecstasy. With David Bowie already artfully proving this year how hallowed icons of rock can age gracefully, Depeche wear their years like vintage wine – rich, powerful, and with a constant allure of tainted romance.

The influence of VCMG – Martin Gore’s first-rate collaborative album with Erasure’s Vince Clarke (and a founding member of Depeche Mode, let’s not forget) is writ large across many of the tracks here – My Little Universe in particular is full of the throbs and clicks of syncopated metallic interplay. If Sounds Of The Universe defined itself on a loose, organic palate of sounds, then Delta Machine lives up to its billing in finding its place amidst a skeletal, orchestrated world of wires, rust and electricity. Not since Songs Of Faith And Devotion have both the ‘rock’ and synthetic elements of Depeche Mode sounded quite this… raw. Indeed, if there’s any cornerstone that ties Delta Machine together, it’s that of base pleasures – you can positively taste the rekindled desire in Gahan’s vocals on tracks like Slow; the untempered joy in the gestation of a record that lives up to the band’s revered status.

Depeche Mode have always crafted their best work around the twin themes of sex and religion, and Delta Machine comes as no exception; offering a veritable checklist of fathers, sons and holy ghosts. Forthcoming single Soothe Your Soul sounds like Personal Jesus on viagra, pairing echoey verses with a frenetic industrial beat and cascading deluges of synthesizer. Again, the VCMG influence feels at the fore here – lending the track a rubberiness that fits like a glove to the pre-established Depeche aesthetic.

Soft Touch/Raw Nerve is a delicious throwback to the band’s more pop-orientated material – a neat reminder that this is still the group that perform Just Can’t Get Enough at their live shows. Snarling guitar licks trade places with a frenetic synth line in a track that shares more than a few strands of its DNA with the band’s mid-’80s S&M anthem Master And Servant.

With Orchestral Manoeuvres In The Dark and the Pet Shop Boys both releasing new albums this year, and Kraftwerk’s recent run of live shows at the Tate Modern, 2013 seems to be fast becoming something of a hallowed year for the original greats of electronic music returning to the front lines. Amidst the clamour, it’s the almost-smug self confidence Depeche Mode feel like they’re operating with here that sets Delta Machine apart in its own little world of synthetic pleasure. More than any of their peers, they still seem most readily able to cling on to impressive chart positions and global sales figures in an increasingly hostile digital age (helped in no small part by the adoration held for them across mainland Europe).

People often throw around phrases like ‘better than they have any right to be at this age’, as if continued existence is something to apologise for. And the thing is, Delta Machine is better than that. In what has always been a frighteningly consistent career, Delta Machine stands there amongst the band’s finest work. Call it evolution, call it re-invigoration – like the titular man-machine of James Cameron’s Terminator films, Depeche Mode return again and again, fine-tuning and re-tooling their modus operandi to fit their own desires. We just hadn’t bargained on those desires being quite so exciting.