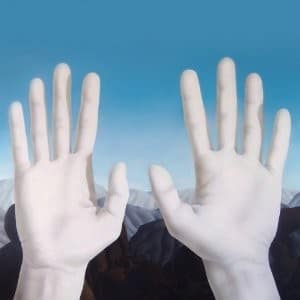 Standard advice in relationships goes that it’s never wise to begin things by being dishonest. So, considering that Daniel Woolhouse, aka Deptford Goth, isn’t really a Goth and doesn’t even come from Deptford, we’re building on shaky ground.

But if names were always windows to the soul of music, several highly successful bands would have fallen at the first hurdle. Imagine Oasis as a soothing muzak ensemble, calming shoppers as they peruse department store underwear. Or Nirvana as the soundtrack to spiritual enlightenment and inner peace rather than the disaffected, angst ridden young men they were. Let’s not even start on the Arctic Monkeys.

Misleading moniker aside, Woolhouse is an exceptionally talented musician and Life After Defo a remarkably good debut record. You can forgive him for whatever he chooses to call his music when, like a mysterious stranger, it grabs your attention immediately, reveals itself to be deliciously complex and, like any good partnership, grows on you the more you consume it.

Woolhouse is from the same, synth-pop meets R&B meets soul tribe as fellow South Londoner James Blake or at a push, The xx. Life After Defo has a haunting air, but is far more than its mood. Rather it’s a collection of tracks which show off real songwriting talent and hang together almost perfectly, ebbing and flowing under his delicate vocals, pulsating with intention throughout.

That intention is usually laced with sentiment. Feel Real, one of two tracks that stands out on a consistently impressive album, sums Deptford Goth up entirely. He tells us of returning lovers, how “forever meant nothing when we had nothing” and how it’s “better to have been with than lived without it”. Synth notes pulse, drums beats ebb and, by the end, it verges on euphoric despite its laid back pace.

Union is the other track that will be remembered on the first listen. It’s the most obviously ‘pop’ song on Life After Defo. On it, Woolhouse uses his vocals to carry an infectiously catchy verse and equally mesmerising chorus. Again, he is in a wistful mood, but with lyrics as good as “Don’t go far, don’t go put your feet in standing soul scratched wrestling with heartbeats” it doesn’t really matter that he isn’t the eternal optimist.

Elsewhere, Woolhouse shows his accomplishment as a songwriter, keeping the mood of the record but showing the variety in his work. Years begins as if it might be a slow amble through his thoughts before erupting into an enormous atmospheric chorus – big, bold and poignant. He can do the low key too – Lion is just him and a synth telling a love song. It comes right after Union, balancing out the big gestures on the album with its delicate core.

The way that Life After Defo is comprised emphasises this even more. So as Object Objects is upbeat, Woolhouse talking about the virtues of love, the next track Particles has guitars that The xx would surely love to pinch, a nifty little rat-a-tat drum line and lyrics that add to its broody appeal.

Life After Defo is both complex and accessible, intricate and immediate. Daniel Woolhouse writes songs that drip with emotion and melancholy. He proves that atmospheric electronic music can be made euphoric, uplifting and moving. Proof that, despite leading us on, a relationship with Deptford Goth is one to nurture and cherish.