Destroyer – Have We Met 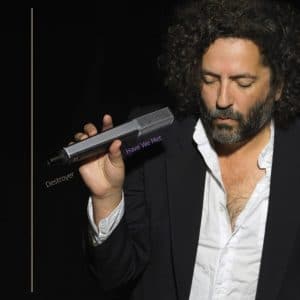 Remember that time when that guy called Luke played a piano in the park to try and win back his ex-girlfriend? Then had to stop because he got punched in the head, and it turned out they’d only been together for like four months anyway? And she really wasn’t impressed? Ok, so imagine that Luke got older and older, more Canadian, and someone nicked his piano, so he had to play his synthesiser instead. You’ll now be in the right state of mind for Destroyer‘s Have We Met.

That’s not so say that the 13th studio album from Dan Bejar and his revolving band of merry musicians isn’t very good. Indeed, we open with the electronic bouncy-castle notes of Crimson Tide – perfect with sugar plumb beats, no doubt destined for a movie montage in the near future. It’s more that, with his surreal, poetic lyrics, and slightly grating voice, we’re left in many places wondering exactly just what Bejar is driving at.

“I find the silence a mirror ball/ What does this say about the silence…” At its heart, Have We Met is, well, lift music. You might encounter this kind of obtuse electronica whilst heading up 16 floors to that new PR agency you’re about to employ to promote your performance art – or in one of the more cutting-edge cosmetic surgery clinics. That’s because at the heart of Destroyer’s lyrics lies a self-obsession that runs almost to the point of narcissism. Ok, it’s true, kill your darlings – but it’s where this self-mythologising becomes entitled that Destroyer trips up. And after all, what do you expect from someone who had no idea he was naming his band after a Kiss record anyway?

That being said, there are some highlights. The Raven merges piano with percussion and lyrics that seem, in part, sincere (“Just look at the world around you / actually no don’t look”) invokes a sense of falling in love, whilst title track Have We Met (which, notably, has no lyrics) is a surreal, echoing Sunday hangover enveloped Velvet Underground-ish hug.

“Like everything that’s come before you are gone / the idiots dissonant roar / that exquisite gong struck down / Cue synthesiser…” (Cue Synthesiser) At the end of the day, in an industry that’s archetypally littered with ageing white men, an ageing white man has to do a lot to keep our attention, and thus do Have We Met’s parts not quite add up to a sum. However, 13 studio albums is very impressive, and musically, Have We Met is one of Bejar’s most interesting so far. But the grating oh-so-indie-look-at-me lyrics bash against the beauty of the beats. Maybe, just maybe, Destroyer should focus on soundtracks from now on.