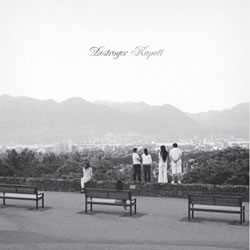 2011 would appear to be a particularly fruitful time for followers of the quirky, reclusive songwriter Dan Bejar. He has reached UK audiences largely through word of mouth, having consistently refused to tour either in his Destroyer guise or with New Pornographers, the Canadian supergroup in which he plays a substantial studio role. Now, not only is he back with a brand new Destroyer album, but it seems to at last be accompanied by live shows in the UK.

Bejar’s peculiar, verbose brand of songwriting is certainly an acquired taste and Kaputt is an album likely to provoke detractors as much as please his fans. Whilst his dense, stream of consciousness lyrics and the pinched, nasal character of his voice are consistent elements in the Destroyer sound, Bejar’s muse has tended to send him in all manner of unexpected directions. Your Blues had introduced orchestral and MIDI elements to Bejar’s songwriting, but this was largely jettisoned for subsequent albums (Destroyer’s Rubies and Trouble In Dreams), which presented Bejar’s confounding narratives in an epic alternative folk setting.

As is the fashion these days, Kaputt draws heavily on the lush sounds and production sheen of the early 1980s. Whilst there is the danger of this material sounding horribly dated and nostalgic, it’s important to note that Bejar shares some of the sophisticated songwriting techniques of acts from that era (The Associates, New Order, Talk Talk, Tears For Fears and, especially, Avalon-era Roxy Music). Kaputt is arguably his strongest album melodically. As well as its detailed, evocative textures, this album also contains some of his catchiest, most accessible songs. The opening two tracks Chinatown and Blue Eyes, are the clearest examples of this, even making the concession of having strong choruses. They immediately set the tone for the album as a whole.

Bejar has relaxed his vocal delivery a little here, perhaps to better blend with the rich, shiny detail of his music. There is also the very satisfying presence of Sibel Thrasher, a backing vocalist sounding very much unlike her name – a smoother presence to soften some of Bejar’s sharper edges. Similarly, the prevalence of reverb-drenched trumpet and saxophone, although potentially embarrassingly cheesy, contribute greatly to the lush, smooth, refined quality of the sound. It’s all so meticulously crafted as to seem honest, genuine and articulate as opposed to drenched in irony and smokescreen.

As ever, there are knowing references sprinkled into Bejar’s lyrics. There’s the line about “your first love’s new order” in Blue Eyes and then, in the remarkable, allusive Suicide Demo For Kara Walker he claims “you got to say yes, to another excess”, surely referencing the 1983 Yello album of the same name. For discography obsessives, Bejar’s lyrics are a pleasing playground for smug namedropping. The one hint of nostalgia comes in the title track, in which Bejar lists UK music publications (“Sounds, Smash Hits, Melody Maker, NME – it all sounds like a dream to me”). This is definitely as Anglophile an album as Bejar has yet made.

The album closes with Bay Of Pigs (Detail), recycled from last year’s EP. Its journey from sleek minimalism to smooth pop sounds like something of a prototype for the sound of the rest of the album. As such, it seems a little strangely sequenced here, even though it is an impressive, intricate song in its own right. Still, it hardly detracts from this being Bejar’s most conceptually strong and accessible album to date.