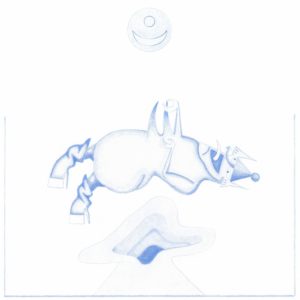 Devendra Banhart felt genuinely and refreshingly other when his first two albums appeared in 2002. Recorded on answering machines and delivered in a hiccupping Marc Bolan style, his creepy campfire folk tales of little monkeys and a ship ran by his great-great-great-great-grandfather stood out in a year of slick Nirvana-indebted rock (The Vines), Nirvana-member-guesting behemoths (Queens Of The Stone Age) and Nirvana (the official release of You Know You’re Right). He opened for alt-rock acts like Sonic Youth: cross-legged on a rug, straggly long hair, beard and beads framing his impossibly pretty face. “I’m lost in the dark, lend me your teeth!” he’d repeat with growing intensity, to much confusion.

His next three releases were better produced and uniformly lovely, in particular Rejoicing In The Hands, which helped introduce freak-folk earth mother Vashti Bunyan to a new audience. Yet there was a feeling that he was perhaps painting himself into an eccentric acoustic corner. 2005’s Cripple Crow was the perfect response to this: a wildly eclectic full-band record packed with trademark charm, mischief and mesmerising melodies, vast in length and scope; it wasn’t just the LP’s sleeve – Devendra’s own backwoods take on Sgt. Pepper’s… – and a track called The Beatles that led critics to compare it with The White Album. Nothing Banhart has released since has had the same impact: Smokey Rolls Down Thunder Mountain was heavy on jams but light on tunes; hair was shorn and eccentricities turned down for the sunny What Will We Be and 2013’s low-key Mala.

Ape In Pink Marble is a subtle proposition, but an intriguing one. The album’s title – perhaps a nod to his parallel life as a visual artist – suggests a studied surrealism and oblique personal expression. Its songs can be divided roughly into two camps: faintly funky frivolities and sad, late-night reflections. Many of the later find Banhart exploring new sonic ground, tracks of a mood with Arthur Russell or Lewis’ recently unearthed L’Amour; washes of synthesiser, strummed acoustic guitars, vocals rarely above a whisper. Something – melancholy, loss, regret – often lurking beneath the sophisticated, shimmering surface.

Opener Middle Names was written for Asa Ferry, frontman of Los Angeles-based band Kind Hearts & Coronets and Banhart’s good friend, who passed away last year. “It was initially about thinking I saw him waiting at a bus stop,” Banhart has said. “And then the feeling of knowing we were both wandering through the city, possibly only a block away from each other but not knowing it, the feeling of alone together.” “Feel the rain fall down,” he sings over whooshes of synth which resemble cars passing through puddles.

The characterful quiver in his voice which made his early records so distinctive is prominent here, in a way it hasn’t always been of late. Linda is a sombre first-person account of an Eleanor Rigby-like “lonely woman” who “won’t leave a trace”, drifting hopelessly through town. Mourner’s Dance is stately and ghostly (“we remember you”). Celebration feels like anything but. Even if the meaning in these songs is sometimes obscured, there’s no denying their grace and beauty.

Elsewhere Banhart demonstrates his knack for adopting different styles and influences. Fancy Man is fantastic William Onyeabor-style fun, flecks of splendid Asian-influenced guitar decorate Saturday Night, while Theme For A Taiwanese Woman In Lime Green is a lilting Tropicalia track complete with gorgeous string section. When he indulges his zany side, however, the results are less successful. Fig In Leather, with its synthetic strings and groan-worthy spoken word section (“I’m real hi-tech authority… have you seen my carrying case?”), resembles a particularly grating Ariel Pink number. Jon Lends A Hand feels lightweight and throwaway, while the two-minute Good Time Charlie is two minutes too long.

Despite these misfires, it is to be hoped that Ape In Pink Marble doesn’t fall on deaf ears. Its best moments deserve the kind of audience who’ll lean in and listen intently late at night, alone together.