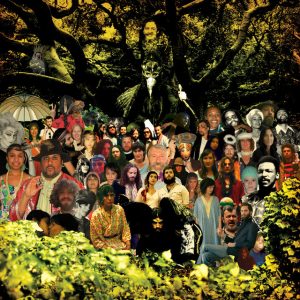 Prolific American beardy weirdie elf Devendra Banhart has built up to the release of his latest sprawling opus – and second album of 2005 – with some notable guest appearances. CocoRosie have him on their latest release Noah’s Ark, while Antony Hegarty employed him on his Mercury-winning I Am A Bird Now. Cripple Crow, astonishingly, is 23-year-old Banhart’s fourth album as a solo artist, but suddenly it seems people are listening to this minute minstrel’s music and musings.

The extraordinary 22-track melange they’ll hear is a ’60s psychedelic, experimental hippie-folk throwback, an invocation of lost, childish innocence delicately constructed with a deft musical touch. Musically, the record develops Banhart’s sound from the relatively ethereal, sketchy material of Rejoicing In The Hands and Nino Rojo to a plane of assured pop anthems, constructed with flute, sitar and intricate acoustic guitar phrases, but his voice is still repeatedly drowned in reverb.

Songs with vocals are in the main sung in English but there are several Spanish language gems too, legacies of Banhart’s childhood in Venezuela, the standout of which is Santa Maria da Feira. There’s even the odd instrumental and a floaty minute-long duet thrown in to the mix.

It runs the risk of being mistaken for naive old crusty nonsense, but digging a little beyond the surface hippie hair and tie-die cloth reveals Banhart to have embraced the hippie movement’s pacifist ideologies as well as its musical style. “It’s simple, we don’t want to kill,” incants Banhart on Heard Somebody Say. “We don’t have any weapons,” he insists again on the title track.

There’s more in this vein on the infectiously bouyant standout track – and lead single – I Feel Just Like A Child as he asks “I need you to please explain the war”, but this track also distils the whole record’s theme – being a child, and seeing the world from a child’s happy-go-lucky perspective. At least, that’s what Banhart seems to want his listeners to hear.

Yet even the philosophy of innocence is allowed an afternoon siesta as what Banhart does best with this record is give a crash course in how to write solid, instantly catchy pop tunes on the blues scale, marry them to a style of your choice – English folk, bossa, experimental funk, take your pick – while still sounding like he has something relevant to say.

The cover suggests a certain love of that quintessential pop record, Sergeant Pepper’s Lonely Hearts Club, and there’s even a song called The Beatles here. “Paul McCartney and Ringo Starr are the only Beatles in the world,” he says rather obviously. And some of Cripple Crow’s material would at least stand comparison with McCartney and Lennon’s canon.

Banhart’s innate ability to write a damned good tune dispels any niggling doubts about whether the image is all just a little contrived. With tunes as good as Chinese Children, I Feel Just Like A Child, mystical opener I Know What I Know and the title track, Banhart nails his credentials to the wall. His voice, with an affected vibrato, could at times pass for a goat bleating – never more so than on the title track – but he easily gets away with it. He’s such an accomplished and eclectic musician that it’s difficult to listen to this most wide-ranging of records without smiling.

But if Cripple Crow is Banhart’s ode to pop music, it’s one not without surprises. Just when a state of hippie bliss is reached, Banhart chucks in the startling Little Boys. Really two songs in one, a slow start gives way to a rock’n’roll song with the lyrics: “So many little boys I want to marry, I’ve seen plenty little kids I want to have.” It’s weird and not a little disconcerting – rather like Banhart himself. But who would want the banal when they could have Banhart?