Devendra Banhart – Rejoicing In The Hands 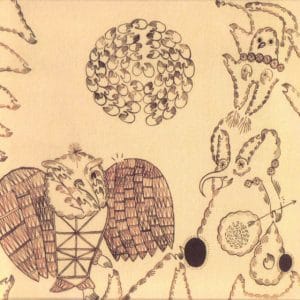 It says much for the enduring ubiquity of the guitar in Western music that the outré folk of the last 10 years sounds more obtusely contemporary in 2004 than it has done since its protest-era heyday, and its Smithsonian-curated history.

Modern influential proponents of lo-tech plucking such as Will Oldham have reinvigorated the genre by returning to the primacy of earthiness, superstition and foreboding implicit in folk’s initial evolution, while applying found-sound production techniques to traditional instrumentation. It is out of this milieu that an artist such as Devendra Banhart arrives with us fully formed.

Rather than rely on the comfort of tape hiss, co-producer and Swans lynchpin Michael Gira chose to give Banhart the full benefit of a modern studio for these sessions all recorded in a 10-day stint. The prolific Banhart provided 57 songs for consideration, and a second album, Nino Rojo arrives later this year. Gira also gathered together a small group of backing musicians who perform so sympathetically with Banhart that it comes as some surprise that the results are not simply the singer’s own overdubs.

It would be easy to dismiss Banhart as another obsessive anglophile were it not for the sweet, lilting lullabies of songs like Will Is My Friend and The Body Breaks, recalling nothing less than the panoramic, polyglot Americana of John Fahey‘s After The Ball.

The 23-year old may have a musical maturity way beyond his years, but the material is by turns youthfully lusting and fanciful, and all the better for it. See Saw and When The Sun Shone On Vetiver are Banhart at his most carnal, while both This Is The Way and This Beard Is For Siobhan may both contain more references to face fungus than any other songs in history. Lyrics like “each strand of her hair is really insect eyes” may be too expressionist for some, but if obscurantism is not your bag, Banhart’s flair for melody is an easy distraction.

As if that wasn’t enough, Banhart’s manages to do the reverential sense-of-wonder thing as good as any singer/songwriter you’d care to mention. This Is The Way’s closing lines of “I know, I know we had a choice / We chose rejoice” are enough to convince you to give thanks while gathering in the harvest (not easy in North London). Autumn’s Child is a frail butterfly of a song, while Rejoicing In The Hands itself would be a morning assembly standard if we all still worshipped sun-gods.

It’s unlikely that an album as enigmatic as Rejoicing In The Hands will be winning any of those coveted album-of-the-year awards at the close of 2004. Yet this record contains enough evidence that Devendra Banhart, and his prodigious beard, will become an ever-more familiar and welcome sight over the next few years.