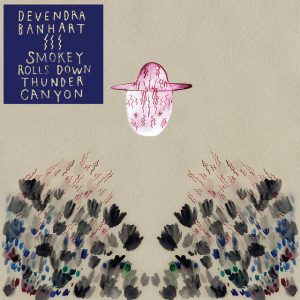 Where better for a wiry, bearded, impish purveyor of “freak folk” to set up hippy happy homely heaven than in California’s bohemian Topanga? For Devendra Banhart‘s fourth solo effort, Smokey Rolls Down Thunder Canyon, he and co-producer Noah Georgeson holed up in the hills north of LA-la-land and laid down a mere 16 tracks. His 2005 effort Cripple Crow comprised of 24. Can it be that he’s slowing down?

It would seem not. One of his new tracks, Seahorse, clocks in at over 10 minutes. Banhart, evidently, has still eschewed any temptation to employ an editor and instead has created a record just as long as his last effort but one in which a palpable sense of space exists. This is not a record of three-minute radio ditties. Rather, Banhart indulges himself and his listeners with more whimsy than ever. As with all whimsies, some of it works, and some of it doesn’t. Yet this hugely varied collection is never less than entrancing.

As befits a Texas-born man whose formative years were spent first in Venezuela then in California, where he learnt English as a second language, Banhart again slips tongues on and off like skins. This time he adds Portuguese to English and Spanish lyrics and, while his English work can sometimes come perilously close to apeing Donovan (check out lead single Lover), his Spanish numbers are the aural equivalent of a day in the sun. His instrumentation, with a sizeable backing band this time, varies more here too – there’s Hammond organ duetting with piano, for starters, and one of his musicians is listed as playing “geese and duck calls, pots and pans” and “mop stomp”.

Seahorse, Banhart’s own Bohemian Rhapsody or Paranoid Android, is an epic amalgamation of several half-ideas for songs that swings between the intimate and the bombastic. The first two minutes of relative quietude sound nothing like the epic prog of its final moments. It stands in sharp relief to Cristobel, the twinkly south American acoustic opener, and the flat-out rock of Tonada Yanomaninista. That, in turn, is as far removed as can be from So Long Old Bean, where he sounds like he wants to join the quiffed ranks of The World’s Greatest Elvis.

The Other Woman, one of the simplest and most hippyish arrangements, is an understated highlight, with just one kooky production trick punctuating Banhart’s trademark reverb-resplendent atmospherics that hark back to a time before digitisation. Carmencita, meanwhile, would sit happily in any Quentin Tarantino soundtrack. Samba Vexillographica, again by contrast, really is a samba. He’s done these before, but they always pop up, resplendent with tootling flutes and enthusiastic backing vocalists and as such still provide pleasant surprise.

Smokey Rolls Down Thunder Canyon may not win Banhart new fans. He remains open to the charge of being a ’60s throwback, an ersatz hippy and in need of editing. And if you’re of the belief that all hippies need a good shoeing, this is a record that will set your teeth on edge.

All those charges are robustly answerable, of course. Where would one start with editing this man’s output? For aficionados of his gnomic genius, and there are many, this new collection provides further reasons to invest time and money in his eclectic works. Banhart on this form is a fascinatingly compelling talent.