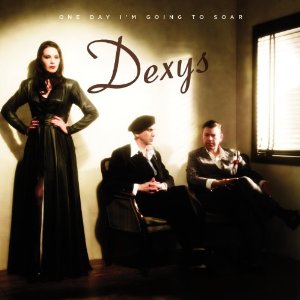 “Compromise is the devil talking,” sang Kevin Rowland at the outset of Don’t Stand Me Down, his ill-feted final album as Dexys Midnight Runners. In the event, it was at least in part his refusal to compromise that turned Don’t Stand Me Down into one of the most unfairly dismissed and misunderstood albums of the ’80s. It’s now been 27 years since that album and, whilst that period has clearly not always been plain sailing for Kevin Rowland, that album is now rightly regarded as a masterpiece. Playing dressed in suspenders to a crowd of bewildered and abusive adolescent males at the Reading Festival may have been Rowland’s critical and commercial low point, but even his solo covers album has now been granted a degree of admiration in hindsight.

One Day I’m Going To Soar is, however, a stoical and proud album of originals. It is to the combination of personal introspection and extrovert, dramatic soul stomp of Don’t Stand Me Down that Rowland has returned with the latest configuration of Dexys (now minus the Midnight Runners bit). Here are some musicians that have been there from the very beginning (trombonist Big Jim Paterson), have definitely been there at some point (Pete Williams), may have been there at some point (Style Council keyboardist Mick Talbot) and some new recruits (Neil Hubbard, Tim Cansfield, guest vocalist Madeleine Hyland). The end result, however, is a striking resilience of concept, style and approach, evidence that it is Rowland’s controlling hand that still very much defines Dexys.

The songs here present something of a story arc – from provocation, through conflict (the duets with Hyland) and ending in something of a resolution, albeit a very singular one. It starts brilliantly with Now, an epic that moves through several moods. Beginning with an aching piano ballad coupled to a borrowed folk melody (somewhere between Johnny Cash’s I Still Miss Someone and The Pogues), it pauses briefly before erupting into a jubilant groove, accompanied by that wonderfully familiar, inspirational horn section. Rowland is in simultaneously determined and confessional form here (“I know that I’ve been crazy and that cannot be denied but inside of me there has always been a secret urge to fly”), once again musing on questions of aspiration and national and personal identity. There’s a string-laden, heart-wrenching section in the middle that somehow means the song encapsulates all of Rowland’s musical and thematic concerns at once. The energy and drive of the post-punk era, the emotional and physical impact of soul, the Celtic tinge – it’s all there in this deceptively simple, vivid, direct and engaging six and a half minutes.

Much of One Day I’m Going To Soar continues to Rowland’s never-ending quest for freedom – from the confines of personal relationships, from the restrictions of sterotypes and from the expectations of others. His anguished low points are examined in lacerating, microscopic detail on the superb Lost, a fine example of Rowland’s capacity for a turbulent, expressive vocal performance. Questions of national identity recur on the superb Nowhere Is Home (on which the rhythm section play with a little more delicacy, sounding much like a Willie Mitchell session), on which Rowland admits “I don’t know where I belong” before entreating his adversaries to “take your Irish stereotype and shove it up your arse” in an unusually biting, snarling style.

Not everything here works perfectly. There’s a slightly flat feeling that lingers around the album’s mid-section. The protracted, 6/8 shuffle of I’m Thinking Of You outstays its welcome (the smoky saxophone flourishes are a little cliched, and rather tentatively buried in the mix as if Rowland is ashamed of them) and the flirtation with disco on I’m Always Going To Love You feels stiff. The latter is one of a couple of songs on which Rowland is joined by Madeleine Hyland, an attacking, considerably more theatrical vocalist. There is undoubtedly a conflict here between Hyland’s self-conscious dramatics and Rowland’s much more idiosyncratic, untutored singing style. It works much more successfully on the thrilling Motown-inspired insistence of Incapable Of Love. On the whole, Rowland’s lascivious examinations of lust and desire are not as successful or as confident as his seemingly more natural philosophical ruminations. Perhaps it is all part of a necessary search for newer, less comfortable forms.

By its tremendous conclusion, however, One Day I’m Going To Soar still feels like a triumph, in spite of its transparent flaws. The combination of the liberated Northern Soul-esque Free and the melancholy It’s OK, John Joe is inspired. The latter features a classic Kevin Rowland monologue dissecting love and dependence that feels at once righteous and desperately sad (“I still believe in love, I just don’t know what it is”). The conclusion is that being alone may be where Rowland belongs. The central horn and string theme of Free re-emerges for One Last Hurrah. In spite of his touching reconciliation with the demons of loneliness and depression, it’s hard to see isolation as Rowland’s natural habitat. Once again at the helm of a tremendous band, his primary role is surely the brilliantly conflicted ringleader, his unlikely rehabilitation now complete.