Dido – Girl Who Got Away 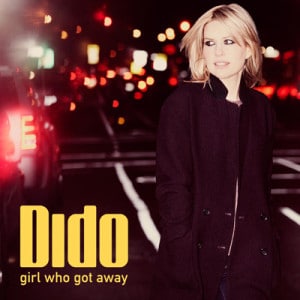 In many ways, Girl Who Got Away is just another Dido album. Her brother Rollo Armstrong is on production duties again for this – her fourth studio effort – arriving after a characteristic four/five year gap since her previous release. But it’s also more than that.

Ten years on from the release of Life For Rent, the record that went on to sell over 12 million copies worldwide, Girl Who Got Away arrives with no ill-gotten intentions to replicate former glories or ride on the coat-tails of a very British sense of heritage. And whilst it is at heart a record deeply involved in reminiscence, it never finds itself resting on the laurels of that nostalgia – instead crafting and moulding it into something that rekindles the very heart of Dido’s original success.

If anything, it’s the title track that lays down the template for the record – shifting and twirling in a slow dance through electronic caresses and the subtlest touches of strings. And at its heart, a chorus of disarming beauty. For us at least, more than anything else, Dido was always about the melodies – White Flag, Thank You – we remember these songs because of the deep-rooted power a certain sequence of chords and inflections has in its capacity to touch our hearts. It’s part of the reason why Eminem’s Stan became a defining track of its generation, and it’s the reason why, all these years on, Dido’s music still functions on such a fundamentally emotional level.

And while this is a record that rightfully always keeps one eye on the past, it’s not without its inclinations and tendencies to the future – erring toward a more synthetic, digital incarnation of the classic Dido sound, and it’s this constant flirtation with the electronic that brings Girl Who Got Away alive. Remember, this is the woman who contributed vocals to numerous Faithless tracks. There’s that same awareness of the possibilities of euphoria and release here, breathing its way through the pulse and flow of the record.

Greg Kurstin co-write End of Night is stunning piece of songcraft – building and rising toward a chorus that echoes out through a flittering line of synth trills, a chorus of transcendent, dreamlike wonder that exists perfectly in its own space – utterly at one with itself. For those that rally to the banner of Jessie Ware and her ilk these days, it’s easy to forget that ten years ago, Dido was already there, blazing her own trail, setting the template.

Blackbird, with its quick, frenetic verses, feels like a prototype Katy B record, whilst late album highlight Go Dreaming moves along similar lines, a rubbery bassline pushing the track forward as it falls deeper into a well of electronica. Epitomised by the vast, sweeping scope of Loveless Hearts, there’s a captivating quality to proceedings here – songs that creep up and under the defences we’ve put around our feelings, all in an effort to cope in a hectic, modern world. The album asks us to pause for a moment, consider, reflect – a sort of life lived at half-speed ethic that throws open the aptitude to notice all those little intricacies so often overlooked.

Sitting On The Roof Of The World is far from being the most instant of tracks, but its lyrics – though characteristically abstract – offer a sobering moment of reflection, and a host of possible allusions to Dido’s experiences within the music industry: “Everyone says I was lucky to have got there / as not many can… / I’d be lying if I said I didn’t miss it now and then…” – Here is Dido’s own pause for thought, her honesty bleeding through in the form she knows best. For those looking for any kind of raison d’être here, it’s to be found in the song’s next few lines: “people say what’s so special about being back here, with everyone so close. But that’s the point, I don’t want to be different, I just want to fit in.”

By its very nature, Girl Who Got Away is predisposed to being a very gentle kind of record, especially as far as ‘comeback’ albums go – but that works in its favour. Dido has never had to strain and shout to make herself heard. Moreover, the Dido we hear this time is an older, wiser one – still operating within the sphere of romanticism – but it’s a more analytical voice, one with a good deal more experience behind it. As an album, it doesn’t break any new ground – It doesn’t try to. What it does do though is sweep itself up in a groundswell of beautiful, heart-tugging nostalgia so strong it’s as if 2003 lies just beyond the window again, shimmering in the haze of the morning dew.