Digitalism – I Love You, Dude 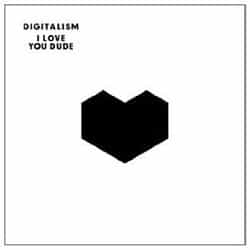 Digitalism have done profoundly well for themselves over the past couple years. Without much of a critical blessing, a charting single, or a distinguishable identity, the German, Astralwerks neophytes have managed to pop up at nearly every festival across globe – inserted in solid timeslots and amongst respectable company.

They’ve been swept up in popularity based solely on a demographic looking for crunchy electro hooks – for the audience, their success was nearly inevitable. When their debut album Idealism dropped back in 2007 it was part of an incandescent flare of rock-infused house; Justice, Simian Mobile Disco and Klaxons were all founding a career – and Digitalism managed to blur into that cacophony with few complaints, with that textural propulsion serving as a tailwind. Digitalism were mistaken as heroes. Now four years removed with I Love You, Dude, they’re forced to stand out more on their music than ever before; when they once sounded raucous, faceless and fun, they now come off creatively bankrupt, and disconcertingly unstylish.

We certainly shouldn’t be surprised that Digitalism made another record for the Coachella DJ tent; after all, it’s made them quite a bit of money and thoroughly established their reputation. It opens up with a light touch; Encore falls apart in an all-encompassing groove, flexing beefy synths, italo piano and a nebulous choir that could’ve been borrowed from a Neptunes beat. The bass drops, the party starts and Digitalism cash their cheque – with their strictness of formula, the band will always be intermittently successful. But the negativity fostered on I Love You, Dude comes in the moments between the hooks; they’re keeping the dancefloor in check through predictable means.

Jence Moelle again folds his voice into something like half of these tracks; he sings in conglomerate clichés; likening an on-and-off relationship to a “never-ending circle”, entitling a song about escapism Forrest Gump while clumsily fumbling around with rhymes like “she may be off, but to be on her list /no time to touch, no time to kiss”. The fifth track Reeperbahn might be his most egregious moment, guising in a bizarre and utterly unlikable marriage of Eurotrash club and the screechy faux-intensity of nu-metal, a crossover that’s literally decades out of style.

While such ineptitude can be set aside for the most part (electro-house isn’t necessarily known for its lyrics), the laziness only strengthens the restrictive hold on the band’s elementary semblance. Digitalism seem much too comfortable to remain idly unvaried and sluggishly unimportant in the grand perspective. They simply don’t concentrate on being great, and instead take the easy way out whenever the chance is offered, like they’re willfully painting themselves into a corner. For a band that lists Daft Punk as their primary influence, they refuse to borrow the spirited modernism that so defined the French robots and instead adapt their most superficial and easily impressionable elements.

Yet it’s impossible to get through I Love You, Dude without succumbing to a few grooves. The sub-mulching piledriver of Antibiotics or Blitz’s glowing synth orchestra seem to bypass the brain and directly attack the hips. The record is obvious and contrived; but bass is bass, a drop is a drop, and a banger is a banger – no matter how much guilt the enjoyment brings. So that leaves us with a band setting out to inspire a legion of dancers whose comprehension of the music is as at best emaciated. That’s probably the way Digitalism want it. If so, they’re rather triumphant.

More on Digitalism
Digitalism – I Love You, Dude