Dinosaur – Together, As One 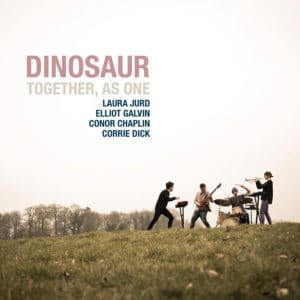 Trumpeter and composer Laura Jurd has, at a young age, already established herself as a restless and open-minded musician. Her impressionistic debut album Landing Ground captured someone exploring a fascinating hinterland between modern classical composition, folk melodies and exploratory free improvisation and interaction. She then contributed to one of the finest records of the decade so far, Blue Eyed Hawk’s emotive and often thrilling song-based project Under The Moon (an album that really did deserve to reach a much wider audience).

Some of that ensemble went on to feature on Jurd’s next project in her own name, the louder and very confident sounding Human Spirit. By this stage, it had become clear that Jurd was not a musician to be categorised or pigeon-holed. She is currently a BBC Radio 3 New Generation Artist, and is exactly the sort of flexible and questing musician that ought to benefit from such schemes.

Dinosaur is Jurd’s latest ensemble vehicle, and arguably her most integrated and well honed project to date. Joining her in this intimate but outward looking electric ensemble are playful and quirky keyboardist Elliott Galvin, bassist Conor Chaplin and Blue Eyed Hawk drummer Corrie Dick. This is a serious, impressive group of musicians with a very strong musical connection. The music is deceptively simple – often built on open-sounding structures, direct melodic devices and repeating bass figures, yet the band can also handle Jurd’s more intricate rhythmic devices (Primordial, for example) with startling accuracy. For the most part, this is the sort of writing that lends itself very well to development and improvisation, as there are few limits on where it can be taken when the individual contributions of all the musicians come in to play.

Whilst the clearest reference point for this music is surely electric Miles Davis (specifically those brilliant transitional records Filles De Kilimanjaro and In A Silent Way), the open landscape of this music is sometimes redolent of our own countryside and hints at more personal, distinctive and homegrown elements. In addition to the transparent electric ensemble lineage, there are moments that hint at trumpeter Ian Carr’s experiments with classical and folk idioms on Northumbrian Sketches and Old Heartland (Carr was also Miles Davis’ biographer). It’s an intriguing mix executed with agility and a strong sense of energy and forward motion throughout.

Any listeners that have lost touch with Jurd’s movements following Landing Ground may be surprised not just by the elastic quality of this music, but also by its intensity. Corrie Dick’s drumming is as preoccupied with sound and texture as it is with rhythm and groove, and the drums vary from subtly provocative clicks and taps to a supple and authoritative clatter. Similarly, this being an electric ensemble, something as simple as a change in keyboard sound (Galvin uses organ, distorted Wurlitzer and Fender Rhodes) can radically alter the feeling of the music. The approach to improvisation here is both interventionist and hugely responsive, with a strong empathy and trust between the musicians. They have the trust in each other to follow the intuitive paths in which the music travels. The band can reach a furious noise (as on Living, Breathing) or sustain a more contemplative kind of intensity (as on the lithe groove of Extinct).

Whether in a reflective or turbulent context, Jurd’s trumpet sound is clear and resonant throughout. Whilst the cover image features the band playing to each other in the great outdoors, clearly relishing their own interactions, they also play hear with a strong sense of projection and communication as well as internal rapport. This is a great reminder that whilst it may be increasingly difficult to define as a genre, jazz is more readily understandable as an arena in which individual and collective expression co-exist without conflict. We can only hope this band gets the time and opportunity to further evolve before it become extinct.

More on Dinosaur
Dinosaur – Together, As One